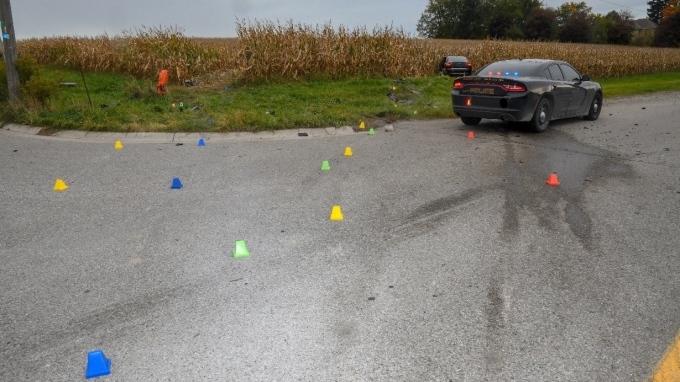 The crash scene at Longwoods Road at Christina Road in Strathroy-Caradoc, Ont. on Oct. 14, 2020. (Source: SIU)

MIDDLESEX CENTRE, ONT. -- Ontario's Special Investigations Unit (SIU) has concluded an investigation into a crash that followed a police pursuit.

On Oct. 14, 2020, a Strathroy-Caradoc officer was pursuing a vehicle that failed to stop for police.

Shortly after the officer was told  to end the pursuit, the vehicle crashed into a second vehicle on Longwoods Road at Christina Road.

The director of the Special Investigations Unit, Joseph Martino, has determined "there are no reasonable grounds to believe that the officer driving the cruiser committed a criminal offence in connection with the collision and the woman’s injuries."

He points to the fact that the pursuit lasted less than two minutes and the cruiser was some distance away when the collision occurred.

He added, "It is highly regrettable that the Complainant, whose misfortune it was to be in the wrong place at the wrong time, suffered serious injuries in this matter. However...I am satisfied on the aforementioned-record that the officer neither caused the collision nor conducted himself in a fashion that transgressed the limits of care prescribed by the criminal law."