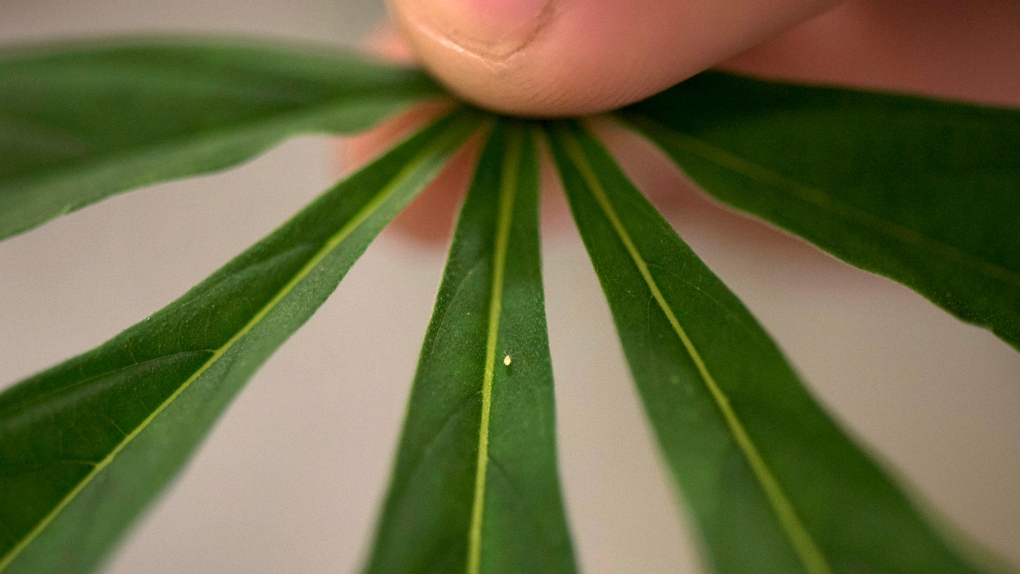 Hypoaspis miles, a small predatory mite, is seen on a cannabis leaf at Bedrocan Canada, a medical marijuana facility, in Toronto on Monday, Aug. 17, 2015. (THE CANADIAN PRESS / Darren Calabrese)

The word hangs in the air for just a moment before WeedMD CEO Bruce Dawson-Scully suggests using the word “mite” in a medical cannabis production facility is tantamount to saying “bomb” in an airport.

He’s only half joking because the steps the company takes to keep the nearly-invisible predator out of the marijuana plants at its Aylmer facility is painstaking.

It’s just as airtight as the personnel security system, which includes vehicle screening and signing for a key card that is needed at every door inside the facility. (At certain doors the extra layer of security is a code as well as the card).

Upon entering the facility, shoes need to be rinsed off and then disposable footwear covers added.

Hair nets as well as white Ghostbusters-like jumpsuits must be worn.

“We’ve never actually had a spider mite (inside) but we always use controls,” says Nick Trueman, the cultivation manager, who has experience in cannabis production and horticulture.

He’s constantly monitoring the 14,000 plants, including their nutrient levels and the temperature and humidity of their environment.

As part of WeedMD’s biological integrative pest management system, Trueman says species of predator mites are used to combat any spider mite resilient enough to make its way in.

“There’s actually always a little war going on in here…and we can’t even see it happening.”

Another enemy of the marijuana plant is the fungus gnat.

It will lay eggs in the soil and can damage a plant’s root system.

Trueman uses a nematode to help control the pupae of the fungus gnat.

“It will lay eggs in the soil and the nematodes will help control and kill the pupae and the larva from the fungus gnat,” he explains.

“We’re continuously trying to eradicate them.”