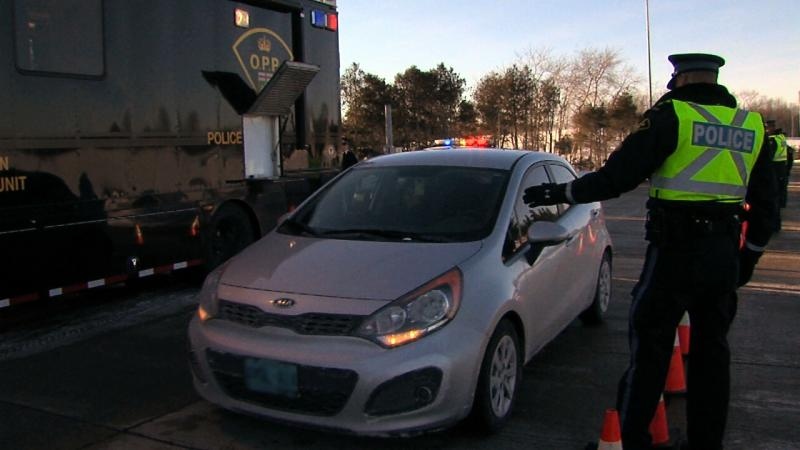 An officer conducts a traffic stop during the Festive RIDE campaign in this image provided by the Ontario Provincial Police.

Provincial police say the number of impaired driving charges they've laid over the first nine months of this year is down about 17 per cent from the same period last year.

But they say officers have seen a "worrisome increase" in the number of people being charged with driving while impaired by drugs other than alcohol.

However there was a 32 per cent increase this year in the number of drug-impaired driving occurrences, compared to 2013.

The provincial force says it will be cracking down on all types of impaired driving during the holiday season during the annual Festive RIDE (Reduce Impaired Driving Everywhere) campaign that starts Monday.

The OPP says only a small number of "irresponsible motorists" are continuing to drive while impaired by drugs or alcohol but that "the carnage and harm they can cause is impossible to calculate."

They urge everyone to never drive impaired, to discourage others from doing so, and to call 911 if necessary to get an impaired driver off the road.

The RIDE campaign runs until Jan. 2.

"The OPP goal is to get through the holiday season without losing a single life to impaired driving," says Commissioner Vince Hawkes

"We will use a combination of public education and focused enforcement to drive home the message that impaired driving on Ontario roads is never acceptable."