One person is dead and 20 others were injured - two remain in hospital in critical condition - after a fire swept through an apartment building on Walnut Street early Thursday.

Three firefighters were among those hurt. They were treated for minor injuries and have since been released from hospital.

As many as 30 firefighters battled the blaze at its peak and officials call the initial fire extreme, with temperatures hovering near 1,000 degrees.

Deputy Fire Chief Jim Jessop says “The firefighters went through to the fire floor, they were met with immense heat, staggering conditions they had to battle through.”

The fire started on the second floor of the 132-unit building at 85 Walnut Street, which is a London and Middlesex Housing Corporation building, with many seniors and low-income families.

Jessop says he spent five years working in downtown Toronto and has not seen a high rise fire this serious in his 17 years of duty.

London police are now investigating the fire in conjunction with the Ontario Fire Marshal and the Coroner’s Office.

Investigators say they are not searching for anyone in relation to the fire.

A post mortem of the deceased is expected to take place on Friday. The person’s name is being withheld until the examination is completed and next of kin is notified.

Residents say there was smoke visible shortly after 2 a.m. Some fled, while others took to their balconies screaming for help and some even putting together make-shift ropes to try to escape.

An estimated 200 residents, many elderly, had to be led down smoke-filled stairs to safety.

London transit buses were brought in as temporary shelters to keep people warm and the Salvation Army provided additional assistance.

Resident Ruth Forbes says she feared for her life before she was able to get to safety.

“I opened the door just a crack, and there was smoke everywhere! So I slammed the door, threw down two towels and headed for the balcony, and that’s when I saw smoke billowing from the apartment next to me. The whole bedroom window was glowing red.”

Maria Garcia made a desperate decision to tie sweaters together and try to make her way down the makeshift rope, fortunately firefighters arrived to help.

On the top floor, resident Bill Hughes and his wife were overcome by smoke in their apartment and were forced out onto their balcony.

“There was smoke so thick on the 14th and 15th floor you could not see three feet in front of your face.”

As residents praise the work of fire crews, fire officials are thanking other emergency responders for their hard work as well.

While most residents have been allowed to return to their homes, The Salvation Army is providing care for the remaining evacuated residents.

Many were taken to the Carling Heights Optimist Community Centre, and alternative housing is being sought for those who are unable to return to their apartments.

"As Mayor and on behalf of Londoners, I wish to offer condolences to the family and friends of the victim of today’s tragic fire.

"Our thoughts and prayers are with you and also with those residents who suffered injuries and are now in hospital. You are wished a speedy and complete recovery.

"Thank you to the firefighters who were injured risking their lives to save others. We are grateful to you and to all the emergency service workers who answered the call. We understand this is your chosen profession, but we also realize the value of your ability to run toward danger when the need arises. We are thankful for your bravery." 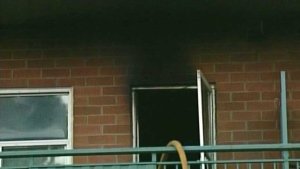