LONDON, ONT. -- Richard Tomlinson lives on the second floor of 516 Albert Street in Strathroy, he is praising his dog April for saving his life.

“I was sleeping, and my dog, I have a black lab, she woke me up because she was smelling smoke.”

After going out onto his balcony, Tomlinson says he could see the fire coming from the balcony of a third floor apartment. He started to alert his neighbours.

As emergency crews arrived on scene Police and Fire worked at evacuating the 50-60 residents of the building, they were all safe, one police officer was sent to hospital.

“One of our officers did suffer smoke inhalation as a result of that, but he’s since been released from hospital” says Mark Thuss of the Strathroy-Caradoc Police Service.

Once the building was evacuated, Strathroy-Caradoc fire moved in to battle the blaze which had now spread to the roof. 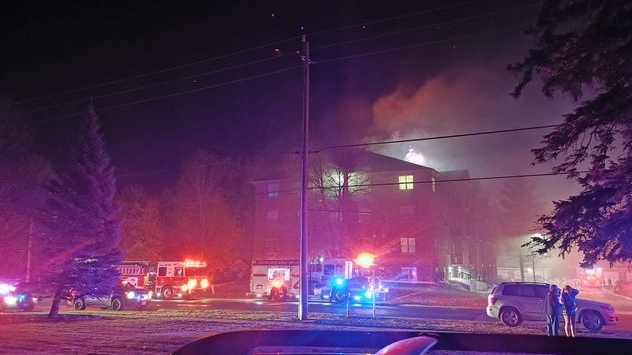 Fire crews on scene of a large fire at an apartment building in Strathroy, Ont. on Monday, Nov. 9, 2020. (Source: Tim Eastman)

The fire has not been deemed suspicious, but the Ontario Fire Marshal has been called in to investigate due to the extensive structural damage to the roof system, that investigation is expected to take a day or two.

“We do have approximately 50-60 tenants that were here that have been displaced by the fire, and we’re working with Red Cross and victim services and having those people lodged else where” says George.

Roughly 15 of those residents were sent to a hotel overnight, while others elected to stay with family or friends. Officials warn it could be awhile before getting back into their homes, depending on the severity of the damage to the roof.

Victim Services says it will be keeping in touch with residents throughout the process.

“Anyone that did miss us, or wasn’t able to speak to us on scene, they are welcome to give us a call and we will help them navigate all the services that are available in the community for them,” says Megan Meyers with London-Middlesex Vicitim Services which can be reached by calling 226-678-4631.