The removal of parts of Ontario’s first burned-out wind turbine north of Goderich is complete, four months after the fire at the Kingsbridge Wind Farm.

Capital Power began taking down parts of the wind turbine on Tuesday and the blades and nacelle were completed removed by Thursday.

An early morning fire on April 2nd destroyed the top portion of the seven-year-old turbine.

The fire burned itself out in about two hours, and while fire crews attended the scene there was little they could do about a blaze 80 metres up in the air.

While no cause of the fire has been released, there has been speculation that there were mechanical or electrical issues involved.

Dan Hayden, Kingsbridge Wind Farm operations manager, says “We have some really good leading indicators, but we don’t have a root cause documented at this time.”

Ontario’s first wind turbine fire sparked concern among local residents, and with another 140 on the way to the area, questions are growing about how turbine fires will be handled in the future.

Steve Gardiner, chief of the Goderich Fire Department, says “We’ve had [the utility company] EPCOR in and done talks with us. We’ve kind of tried to pre-plan as best we could.

“Obviously we can’t reach a fire at that height with any of the equipment we have. You know you protect the ground, you make sure the fire isn’t spreading beyond the wind turbine itself and let it burn out.”

But Gardiner says “A wind turbine fire’s no different than a fire in a factory or a collapse of a building or whatever. I mean we’re going to run into things. We just have to be as prepared as we can and hopefully nobody gets hurt.”

New parts to get the turbine back up should be in place and the turbine spinning again by early September.

The total cost to repair the turbine hasn’t been released, but it cost about $2 million to build it in the first place. 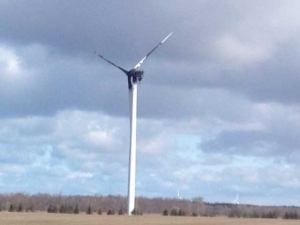