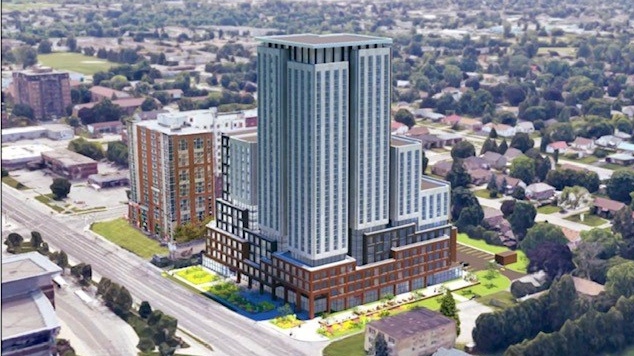 The London Plan’s principle of urban intensification has its limits.

“We all know the need for density in the area, but it’s not this,” explained Councillor Anna Hopkins to the committee.

In a letter from its lawyer, Fanshawe College also opposes the development writing, “Such an intense development is not in keeping with the character and nature of the surrounding area specifically the Fanshawe Main Campus.”

Red Maple Properties wants to build the residential tower on the south-east corner of Oxford Street and Ayreswood Avenue.

Paul Champagne, a planning consultant for the developer, pointed out that intensification is the only solution based on Fanshawe College’s future enrolment projections.

“Under the rental licensing policy in this neighbourhood, the equivalent of 883 new houses would need to be constructed in order to meet this demand,” Champagne told the committee.

“We firmly believe that a recommendation to lower the height and unit count, will only be interpreted as a failure in which London did not respond appropriately to the housing needs of the community,” he added.

Councillor Steve Lehman admitted he was struggling with the recommendation to turn down a high rise along a future bus rapid transit corridor but, “Why is density a big thing? It’s because of the sanitation infrastructure in the area.”

After a motion to refer the design back to staff for further refinement was defeated, the committee unanimously (6-0) recommended that the application be refused.

Council will make a final decision at its meeting on December 7.