LONDON, ONT. -- A political standoff derailed the city's budget meeting for more than half an hour on Thursday.

Speaking against the elimination of funding for a WiFi Hotspot lending program at the London Public Library, Councillor Arielle Kayabaga called the Business Case an “anti-immigrant, anti-poverty, anti-women, anti-children type of motion.”

Several councillors insisted she withdraw her statement, with Councillor Shawn Lewis saying it impugned members of the Library board, including himself.

“It’s disrespectful to the members of the board who had a discussion around this Business Case.”

But Kayabaga refused to withdraw her statement, which she emphasized was about the motion, not the board.

Neither councillor would back down.

Budget chair, Councillor Josh Morgan, ruled in Kayabaga’s favour saying, “It is possible to have two different points of view on this.”

But Morgan’s ruling was successfully overturned by a vote of eight to seven. That left the committee unsure how to proceed.

They went behind closed doors to receive legal advice, then a motion to have Kayabaga ejected from the meeting for “Disorderly Conduct” lost 4-11.

Kayabaga remained, but the Wifi Hotspot funding was eliminated. Council was told the library was seeking a corporate sponsor or could use donations to maintain the program.

At the end of day one, council members shaved just 0.1 per cent off the average annual tax increase.

Much debate over provincial downloading

Several councillors would like to refuse to pick up some of the costs that were, until recently, covered by the provincial government.

“We have the choice of saying, look province, you stepped out of this. It’s not our job as a city to step into your shoes and provide that funding,“ warned Councillor Phil Squire, to kick of six days set aside to deliberate London’s 2020-23 municipal budget.

Morgan pointed to an estimate by the Association of Municipalities of Ontario that cities have seen $3 billion in costs downloaded by the province, “Drawing a line in the sand on some of these items to say the municipality and property tax base is not the appropriate place to fund some of these items.”

But not picking up provincially downloaded costs could jeopardize programs and services that Londoners value.

Council faces a significant budget bind. The draft four-year budget was tabled with an average annual tax increase of 4.5 per cent. That includes a six per cent increase in 2020.

But there is also $183 million in new spending requests for a range of needs, including public housing, a new city hall building and the Back to the River Project. 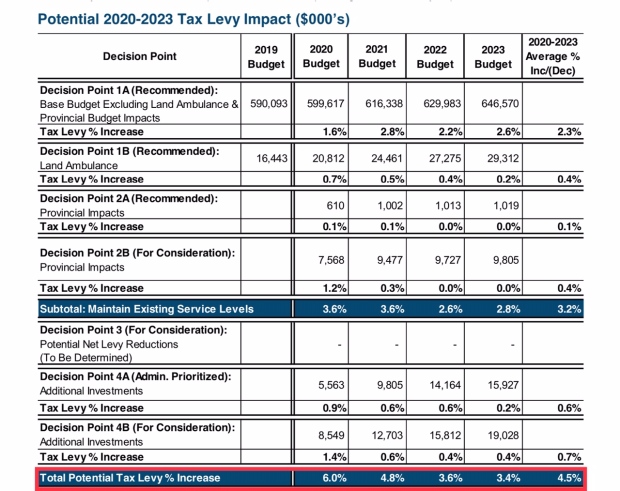 Councillor Michael Van Holst said his priority will be affordability for homeowners, “People write me and say at the end of the month they don’t have money for food.”

Deliberations began with a debate that may foreshadow a long and contentious road to balancing the budget.

A request by Museum London for $54,000 to offset some provincial funding changes immediately drew opposition. Ward 2 Councillor Shawn Lewis admitting the amount is relatively small, but is representative of a fundamental question facing council, “$54,000 here, $100,000 there, $25,000 there, it starts to add up.”

After a lengthy discussion on the relatively small amount, a motion to have city hall fill in the $54,000 funding gap at Museum London lost 5-10. So it appears Morgan’s line in the sand survived its first test.