Why did city hall choose these 15 parks where homeless encampments are restricted?

Why did city hall choose these 15 parks where homeless encampments are restricted?

Not permitted to set up tents in more than a dozen core area parks, some Londoners are choosing riskier locations on steep riverbanks and in wooded areas.

The removal of encampments from city parks has become more compassionate following August’s hunger strike by The Forgotten 519 outside city hall, but the settlement agreement included listing a small number of parks where encampments are restricted.

“I’ve been moved three times,” explained Mina, who has been living unsheltered for three months. “They make you take your tent down every single day, so it’s not really that compassionate.”

The list of parks where “pro-active enforcement” occurs based on public usage and safety include:

Civic administration adds that just 15 of London’s 546 municipal parks are on the list. 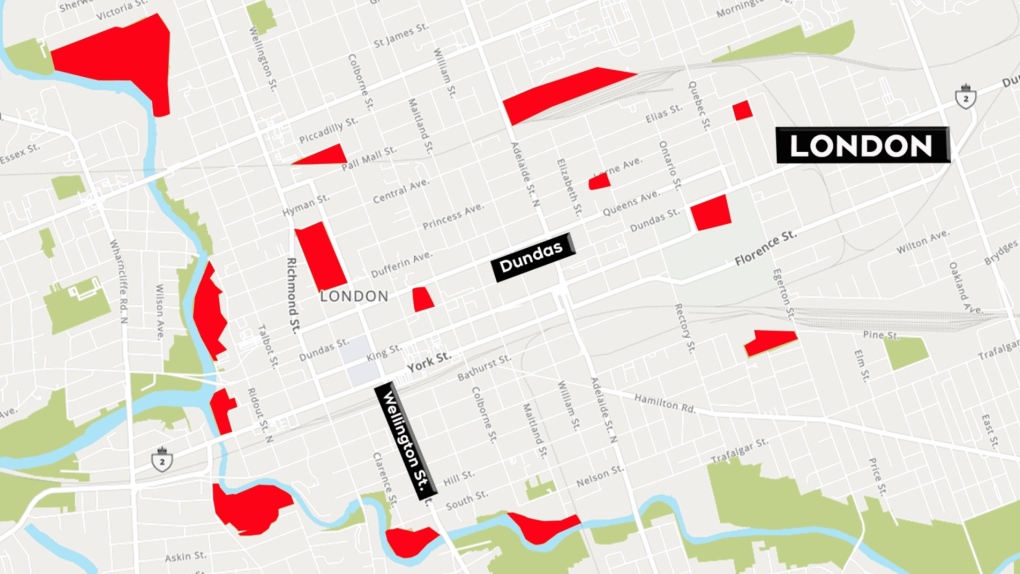 14 of the 15 restricted parks are clustered around London, Ont.'s downtown core area. (CTV)

However, plotting the locations on a map reveals that all of the restricted parks, except Springbank Park, are clustered around the core area, including downtown London, Old East Village and SOHO neighbourhoods.

However, the core area also contains many of the social services and agencies that serve Londoners experiencing homelessness.

That push-pull has some people are choosing riskier locations in the core for their tents and makeshift shelters, including steep riverbanks and floodplains.

Mina believes it is unsafe to be in remote locations not on the restricted park list, and said, “So you are not alone, all by yourself out here. There’s no lighting out here and it’s completely dark at night.”

A request by CTV News London to interview city officials about choosing specific core-area parks to be on the list was redirected to London Cares — an agency that offers outreach to people living in encampments.

“I can’t explain specifically why the city chose the [parks on the list],” said Anne Armstrong, executive director of London Cares. “I do know there is high public activity in some of those parks. We want to be concerned about everyone’s safety.”

Earlier this month, civic administration admitted that the 400 spots in this year’s Winter Response to Homelessness wouldn’t be enough to help everyone living unsheltered.

Armstrong said an “integrated outreach team” could bring services to people anywhere in the city and offer advice about risky locations.

“We would actively work with someone who is in a risky location. Make suggestions, ‘Hey, why don’t you shift over here and we get you connected to service,’” Armstrong said.