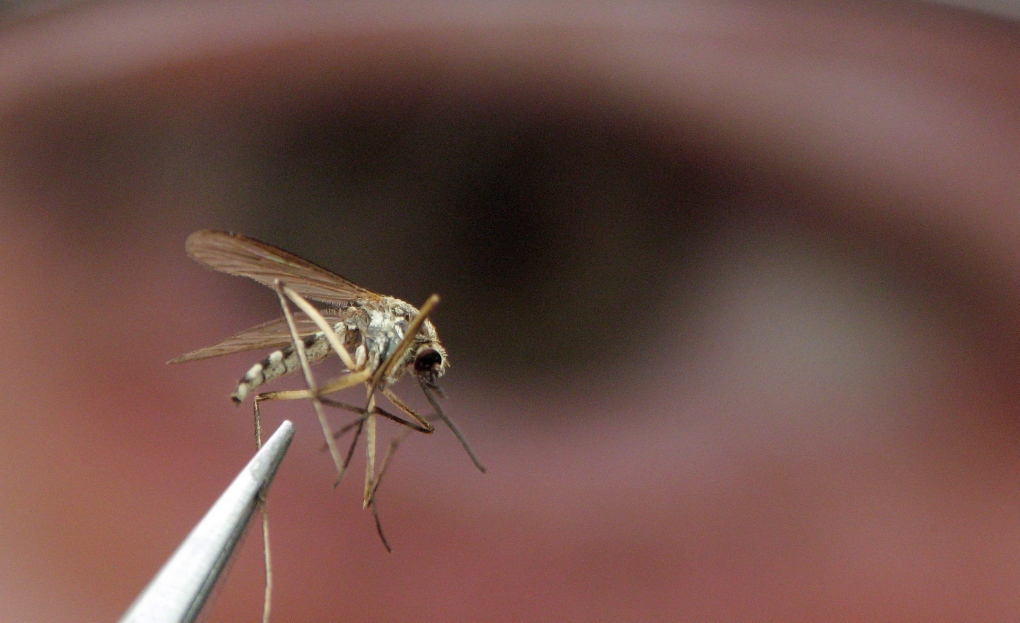 An adult mosquito is shown in the laboratory as the 2007 West Nile Virus program of the Middlesex-London Health Unit kicked off in Strathroy, Ont., Thursday May 10, 2007. (THE CANADIAN PRESS/Dave Chidley)

A deceased bird that was discovered last month has tested positive for West Nile Virus, according to the health officials in Grey-Bruce.

The health unit says this is the first bird to test positive for West Nile Virus in Grey Bruce in 2022. As of Aug. 6, there have been zero reported cases of the disease in humans in Ontario this year.

West Nile Virus spreads between birds and certain species of mosquito. It can be transmitted to humans via mosquito bite if the mosquito first bit an infected bird.

The greatest risk of contracting West Nile Virus is late summer, towards the end of the mosquito season.

In order to reduce your risk of contracting West Nile Virus, the Grey Bruce Health Unit recommends the following tips:

The health unit says that most people infected with West Nile Virus do not experience any symptoms, while others see symptoms manifest in two to 15 days after being bitten.

Symptoms are usually mild, but can include fever and headache. More serious symptoms include a stiff neck, high fever, confusion, tremors and sudden sensitivity to light.

No mosquitoes have tested positive for West Nile Virus in Grey-Bruce this year, but the health unit does add that as of Aug 6. Public Health Ontario has reported 14 mosquito pools through the province positive for the virus.

Hurricane Ian's most damaging winds began hitting Florida's southwest coast Wednesday, lashing the state with heavy rain and pushing a devastating storm surge after strengthening to the threshold of the most dangerous Category 5 status.

Robert Cormier, a Toronto-born actor whose credits include 'American Gods' and the long-running series 'Heartland' has died at age 33.

Truth or bluff? Why Putin's nuclear warnings have the West worried

President Vladimir Putin's latest warning that he is ready to use nuclear weapons to defend Russia amid the war in Ukraine has made a troubling question much more urgent: Is the former KGB spy bluffing?

The Canadian generic pharmaceuticals giant founded by murdered billionaire Barry Sherman in 1974 has agreed to a takeover.

Feds tell Canadian hockey players with KHL teams in Russia, Belarus to get out

Canadians continue to play hockey for Kontinental Hockey League teams in Russia and Belarus despite the Canadian government’s warning to get out of those countries.

What kind of damages caused by Fiona will be covered by insurance?

Many residents of Atlantic Canada may not be able to access coverage for all the damages caused by Fiona due to a lack of insurance covering storm-related floods.

Federal authorities closed Canada's borders Wednesday to commercial dogs, including ones being put up for sale or adoption, from more than 100 countries deemed to be at high risk for canine rabies.