Realtor George Georgopoulos has listed the four acre property at the south-east corner of York and Wellington for about $40 million on behalf of the private owner.

The price is based on its potential as the largest available development site in Downtown London.

“I’d really love to have a Londoner buy this,” admits Georgopoulos. “It’s our community, our deal. Somebody that can work with the city together.”

Georgopoulos had renderings created to show a mix of residential, hotel, and office towers based on the current zoning. 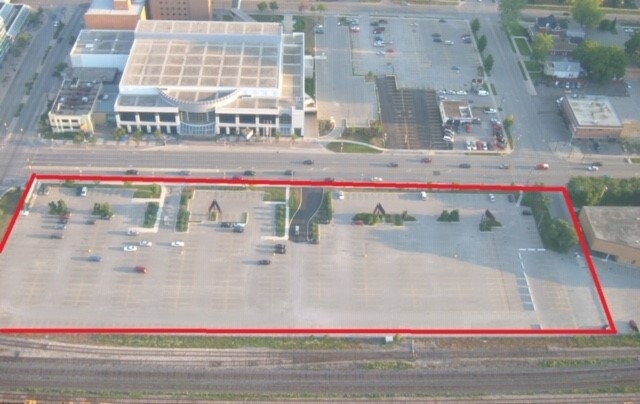 But the property also backs onto the rail tracks, is on the upcoming Bus Rapid Transit route, and across the road from the RBC Place Convention Centre.

He’s like to see the final design include a public-private partnership to incorporate a transportation hub.

While no significant passenger rail enhancements have been approved, Georgopoulos believes they will come if London has the right station.

“When we get high speed (rail), when we get GO-train, we need a new terminal, and the terminal can be right here.”

Heritage advocates have been pushing for developers to build on downtown surface parking lots, and thereby reduce the need to demolish as many historic buildings.

“Surface parking lots are kind of shovel ready development opportunities,” explains Sandra Miller. “A lot of them already have land use and zoning permissions in place.”

Miller says during her campaign to direct more development to surface parking lots, the lot at York and Wellington has stood out an a prime infill opportunity.

“It’s an amazing location for many opportunities, it’s exciting to hear that it’s available, so I hope somebody snatches it up!” she adds.

Georgopoulos agrees that the property is shovel ready.

“This is a clean slate for construction, because it’s a palette for your own imagination.”