Londoners filled Oxford Street between Pratt Lane and Rathowen Street to offer support and sympathy 48 hours after the driver of a pick-up truck killed four members of a family, and seriously injured a 9-year old boy.

Police have say the family was targeted because they were Muslim.

Hugging and comforting each other, classmates of 15-year-old Yumna Salman held signs that read ‘Hate Killed My Friend’.

Huda Sallam was pleased to see so many Londoners attending the vigil, “It is so many important for people who are not Muslim to show up and show support towards Yumna.”

Walter Nowobranec felt compelled to attend the vigil after learning of the tragedy.

“I had to be here for the family. How do I let a moment like that go without them being recognized?” he explained.

In front of the Prime Minister, Premier of Ontario, and the leaders of every opposition party, several speakers from the local Muslim community called for an emergency federal summit on islamophobia.

They also called for an end to hate.

“Although what brought us here is a tragedy, what I want to offer is a message of hope,” said Imam Abd Alfatah Twakkal.

Nawaz Tahir, spokesperson for the London Muslim Mosque, called for a strong response to hate.

“I need all of you to be ambassadors,” Tahir told the crowd. “Ambassadors of love, because love will conquer hate.” 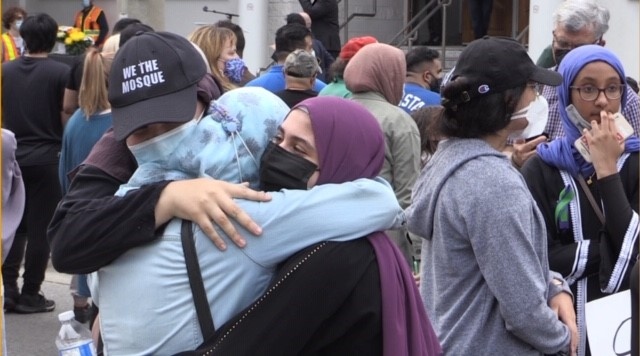 Members of the crowd comfort each other at the vigil in London, Ont. for the Afzaal family on Tuesday, June 8, 2021. (Daryl Newcombe / CTV London)

All of the assembled politicians offered sympathy, support, and a willingness to fight terror, but details were left for another day.

“We must all stand together and say no,” said Prime Minister Justin Trudeau. “No to hatred and to islamophobia. No to terror and to racism.”

Premier Doug Ford vowed that justice will be done, “This was mass-murder. This was a hate-crime. It was an act of terrorism against a family targeted for their beliefs.”

“I am asking you, as a member of the Muslim community, to do everything within your power to make sure this never ever happens again,” said Salih.

Exactly 48 hours after the four lives were taken and a little boy injured and orphaned— the thousands in attendance fell silent in a moment of reflection and prayer.

While still grieving for her friend Yumna, Sallam suggests the tragedy must motivate change.

“She always wanted to be famous and change the world. She’s doing that.”

How realistic are campaign promises around electric vehicles?

The Liberals, NDP and Conservatives all have platforms that call for a shift to electric vehicles in the next 15 years, but it’s going to take a massive shift in consumer buying and ramped up investment in charging stations to make that possible, experts say.