Thousands packed Oxford Street in a show of solidarity for a vigil Tuesday night for the victims in a vehicle attack where police say a Muslim family was intentionally struck, killing four members and injuring a young boy.

Security was tight as dignitaries such as Prime Minister Justin Trudeau, Ontario Premier Doug Ford, London Mayor Ed Holder and other politicians from all levels of government were in attendance.

Trudeau expressed his sympathies as he denounced the Sunday's "act of evil."

"You are not alone. All Canadians mourn with you and stand with you, tonight and always," he said.

An visibly emotionalFord expressed his grief for the family and the community at large. "What happened here in London is a tragedy beyond words," he said.

Ford also pushed for the accused to be punished to the fullest extent of the law. "It was an act of terrorism against a family targeted for their religion. This type of racism and terrorism cannot and will not be tolerated," Ford said.

London Mayor Ed Holder once again described Sunday's events as "an act of mass murder, and a grotesque expression of hatred rooted in Islamaphobia." Looking out at the massive crowd, he called for love and support for the Muslim community.

"I’d like to ask you, my Muslim brothers and sisters, to look over your shoulders on this night. Look at the support, the compassion, and the empathy. Look over your shoulders, and see that you are surrounded by love; love from your fellow Londoners, and love from fellow human beings. This love is unwavering, and unconditional. It is with you always." 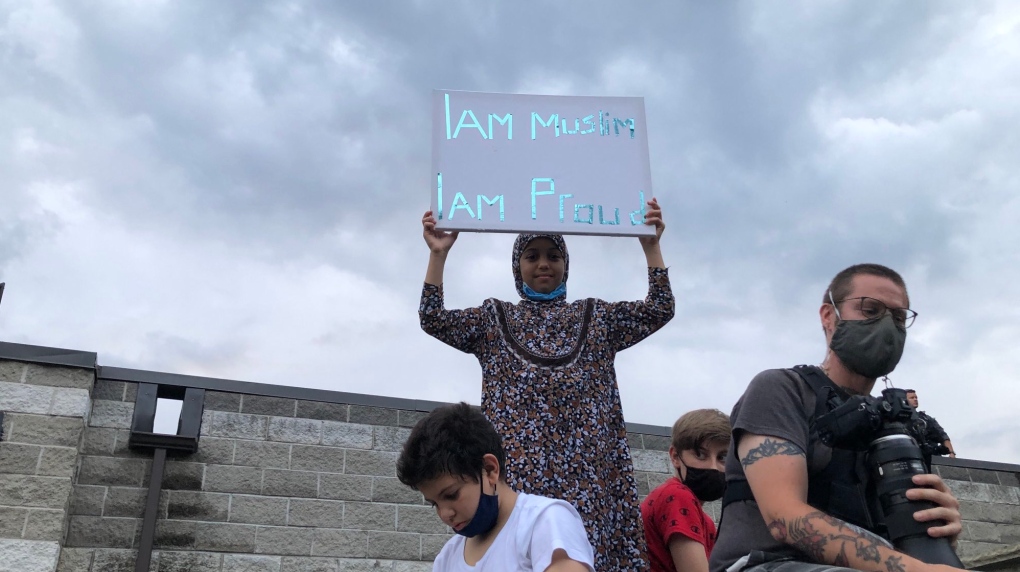 Volunteers handed out masks and bottled water during the muggy evening as some people needed medical attention from the heat. Pandemic restrictions were lifted Tuesday by the provincial government to allow for the event.

There were repeated calls from local community leaders for an emergency national summit on Islamophobia, an idea also supported by the National Council of Canadian Muslims.

Speeches were paused at 8:40 p.m. for a moment of silence, exactly 48 hours after the crash took place Sunday evening.

Some attendees wore a green and purple ribbon, green representing the fight against Islamophobia and purple for 15-year-old victim Yumna Salman. 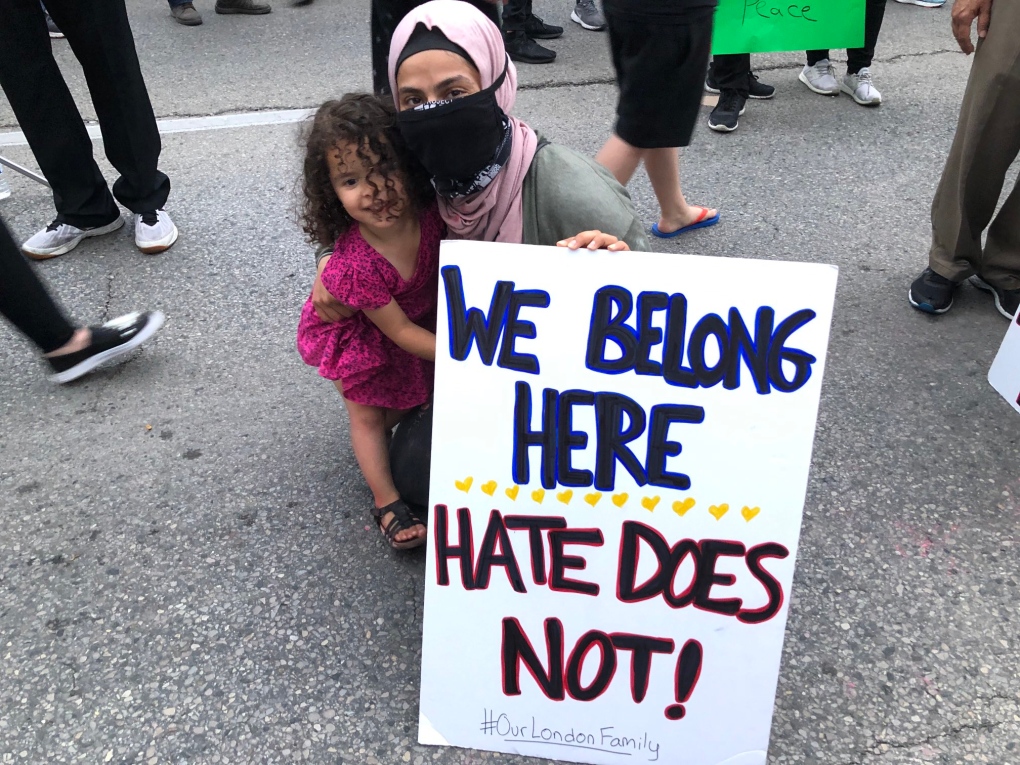 Police said on Sunday a Muslim family from London was out for an evening walk along Hyde Park Road near South Carriage Road when they were struck by a man in a pickup truck.

Four members of the family including a grandmother, mother and father, and teenage girl, died as a result of the attack. A fifth victim, a nine-year-old boy, survived but is in hospital recovering from serious injuries.

A statement from a family spokesperson identified the family members as Salman Afzaal, 46, his 44-year-old wife Madiha, their 15-year-old daughter Yumna, and the children's 74-year-old grandmother. The boy who survived is Fayez., nine.

Police say the 20-year-old male driver of the pickup mounted the curb and struck the family intentionally.

The suspect was arrested near Cherryhill Village Mall on Oxford Street which is located steps from the London Muslim Mosque.

Nathaniel Veltman, 20, of London, Ont. has been charged with four counts of first-degree murder and one count of attempted murder in the attack.

Another vigil, the London Multi-faith March to End Hatred is expected to take place Friday evening at 7 p.m. starting at the site of the crash on Hyde Park Road and making its way to the London Muslim Mosque around 8:45 p.m.