Home is where your nest is, even on a busy road

It’s a busy section of Fanshawe Park Road, between Highbury Avenue and Adelaide Street, at first glance cars going by might not even notice, but truck driver Nathan Watson did during his route.

“Earlier this week I was driving back to the yard and I noticed the Dame right here, just standing there and it kind of startled me,” Watson explained.

The Dame, is a mother goose, who has chosen a concrete planter in the middle of the road as her nest.

Brian Salt from Salthaven Wildlife Rehabilitation and Education Centre said while it seems like an odd place for a nest, there is a logistical plan with this placing.

“When building their nest in a high traffic area like that, they set up a barrier to their natural predators,” he said.

Watson, among others is concerned about the mother goose and goslings that are still protectively under her.

“First thing that came to mind was, you know, if she's parked up a bed here, she can get hit by cars. It could be a car accident caused multiple accidents,” said Watson. 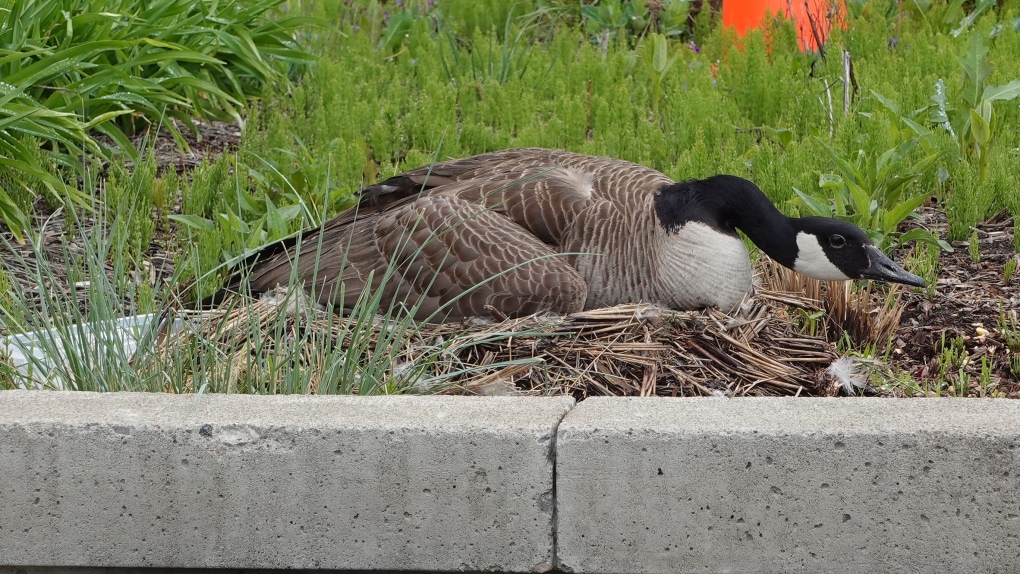 A mother goose has some worried about the placement of her nest along Fanshawe Park Road, between Highbury Avenue and Adelaide Street in London, Ont. pictured on Thursday, May 18, 2022. (Marek Sutherland/CTV News London)

While it’s a natural reaction to want to help, Salt says there are many reasons why you should leave the nest and the Geese alone

“The materialistic us says ‘there's something wrong with this picture.’ But in actual fact, the geese are seeing it from a whole different perspective and are much more knowledgeable above all of this,” he said.

Watson just wants drivers on Fanshawe Park Road, between Trossacks Avenue and Glenora Drive to slow down and keep an eye out for the young family as they will soon be taking their first steps.

Salt believes mother goose has been researching over the last month while sitting on that nest, and will know when it is time to cross the road.

“They know the traffic pattern,” he said. “So oftentimes, they'll move those little goslings in the cover of night so that the traffic isn't quite as great. They just seem to know, you know. “They're very, very smart that way.”

A couple of goslings were visibly moving around when mom shifted her seat on Thursday morning, meaning they will likely start to move around within a day or so.