It’s one of Ontario’s most famous and most used pedestrian bridges. The Menesetung Bridge spans the Maitland River in Goderich, attracting visitors from across the province. But, as beautiful as it is, the 700-foot long structure is showing its age.

“The bridge was constructed in 1906, so that’s 115 years. The concrete has done a good job, but it doesn’t last forever. So, we’re needing to do some of these repairs so it last another 100 years,” says Grant Dawson, chair of the Menesetung Bridge Association.

The volunteer group that saved the bridge from the wrecking ball in 1990 and now owns it, needs to raise between $800,000 to $1.2 million, in order to repair the bridge’s piers within the next five years.

“The community came together 30 years ago, and I’m hoping we come together again, now, to raise the funds need to do this big job,” says Mike Dawson, who helped save the bridge in the early 90s. 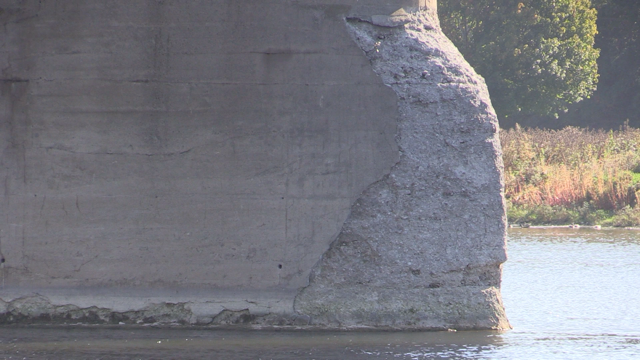 Wear on the concrete base of The Menesetung Bridge in Goderich, Ont. is seen Wednesday, Oct. 6, 2021. (Scott Miller / CTV News)

The bridge has never been used more, as COVID-19 inspired Ontarians to head outdoors for their exercise.

A key part of both the Maitland and Guelph to Goderich Trail, the bridge repairs will require more than just local fundraising to pay for them. Government intervention will be required.

“If they can do the heavy lifting to get the ball rolling, there’s a whole bunch of raving fans out there, in the form of trail users and community leaders, that will get behind it,” says Doug Cerson of the Guelph to Goderich Rail Trail Association.

The Menesetung Bridge Association recently put in a grant application to the province’s Community Building Fund, to help pay for the repairs. They hope to hear back in a couple of months, but they don’t envision a scenario where local and provincial leaders allow the bridge to fall into 'disrepair' again.

“We can’t let it succumb to time and erosion, so yes, it’s a big investment, but it’ll keep things going for a long time,” says Dawson.

To learn more about the Menesetung Bridge and the needed repairs click here.