“In past events there’s been a high number of charges laid in relation to unsafe driving, doing burnouts in the roadway, impaired driving. Police cars were even damaged by participants in these events,” said Huron OPP Const. Jamie Stanley.

Online chatter intercepted by the OPP suggested an illegal or unsanctioned car rally, like the one in Wasaga Beach, may be coming to Goderich this weekend or next.

“That’s scary. That’s an unruly mob, more than anything else. They only care about having fun, and getting what they want. That’s not how I like to do business,” said Goderich Mayor, Myles Murdock. 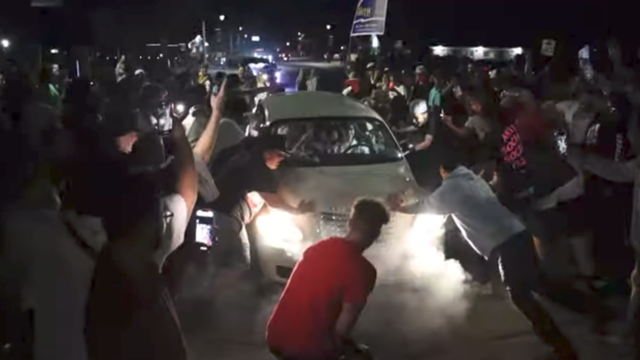 An unsanctioned car rally is held in Wasaga Beach, Ont. on Sat., Aug. 27, 2022. (Photo Courtesy: YouTube/Redin IRL)
Scathing remarks from Wasaga Beach’s Mayor about the OPP response to the August car rally has prompted a more proactive approach from the Huron County OPP and Goderich, who are working together to alert residents to the possibility of the disruptive event as well as actively trying to deter any “unruly” visitors.

“If the event does happen I want to assure citizens that we do have the necessary resources in place. There may be some disruptions in terms of road closures and access points. We may have to take action to temporarily close down some roads. It’s a situation we are fully prepared for,” said Stanley.

“Just respect what we have and what we offer them for their use and be respectful of that. If they do that, that’s fine. Come anytime,” said Murdock.

The OPP isn’t certain on the exact timing this weekend or next, or a specific location in Goderich of the alleged car rally, or if it will even happen.

Meanwhile, officials in Wasaga Beach are preparing for another potential car rally in the community this weekend.