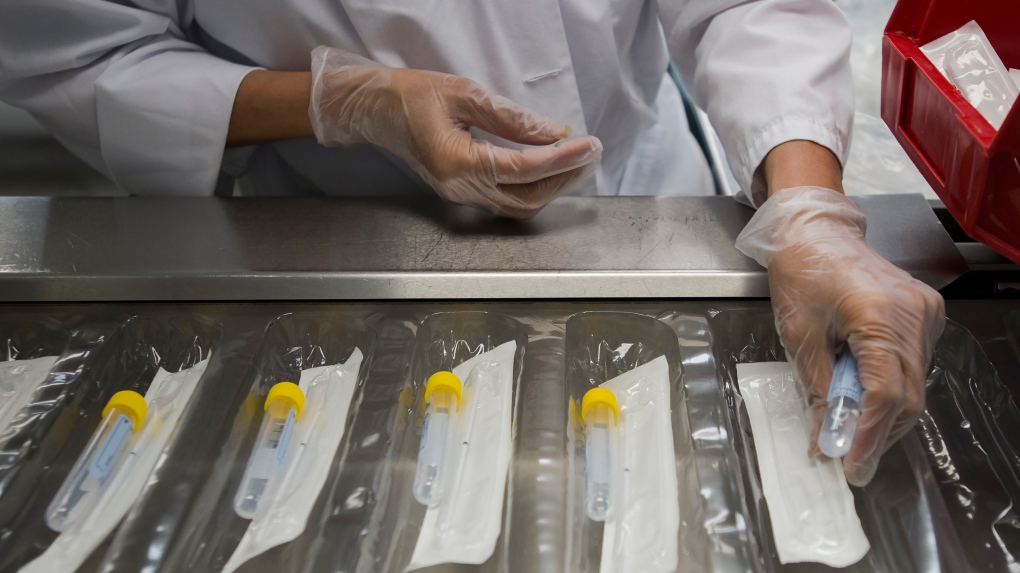 Employees work at the Canadian Hospital Specialities (CHS) helping take dual COVID-19 testing swab kits and separating them into two units to help with swab capacity during the COVID-19 pandemic in Oakville, Ont., on Monday, June 8, 2020. THE CANADIAN PRESS/Nathan Denette

It is the second day in a row, and the sixth day this month, that more than 20 daily cases have been reported.

By comparison, the region only topped 20 daily cases twice in October, and prior to that, the region hadn’t seen a day with that many cases since April – when there were four days with 20 or more cases.

There is some question as to whether this trend of higher case counts could prompt the province to move the region from the yellow ‘protect’ to the orange ‘restrict’ level of COVID-19 guidelines. An announcement on potential changes is expected Friday.

The MLHU has declared a new outbreak of COVID-19 in a Western University residence, Saugeen-Maitland Hall, where eight people have reportedly tested positive and are now self-isolating.

On the positive side, the region’s long-term care and retirement homes remain clear of outbreaks, with the only two ongoing in units at the London Health Sciences Centre’s (LHSC) University Hospital.

As of Thursday, LHSC is reporting there are 11 inpatients and 15 staff who have been infected, four more cases since Monday.

Southwestern Public Health just managed to stay out of double-digit territory for a second day in a row, reporting nine new cases Thursday.

Huron Perth Public Health reported another death associated with the outbreak at Cedarcroft Place Retirement Home in Stratford on Wednesday, where 43 residents and 18 staff have taken ill.

Ontario is reporting a total of 1,210 new cases Thursday, marking 14 days straight of quadruple-digit counts for the province.

'We are left with no choice': Manitoba's top doctor puts new restrictions on gatherings

Bartenders, wait staff most at risk for COVID-19 in Norway's second wave: study