“I could just see the bottoms of his shoes,” recounted Mike Walsh as he remembered the afternoon of September 3, 2020, when he saw a man’s unconscious body in the waters off Kincardine, Ont., and went in after him.

“It was so windy, the first responders couldn’t hear me yelling, so I went in after him. When I got close to shore, a friend of mine, Dave Jenkins, helped pull him up. As soon as we got him out of the water, and to an area where we could work on him, I started working on CPR,” said Walsh.

That man he pulled from the water was Aleem Ramji, who did not survive.

Earlier that afternoon, Ramji had jumped in the water to save his cousins who had been washed off the pier and into a rocky Lake Huron. 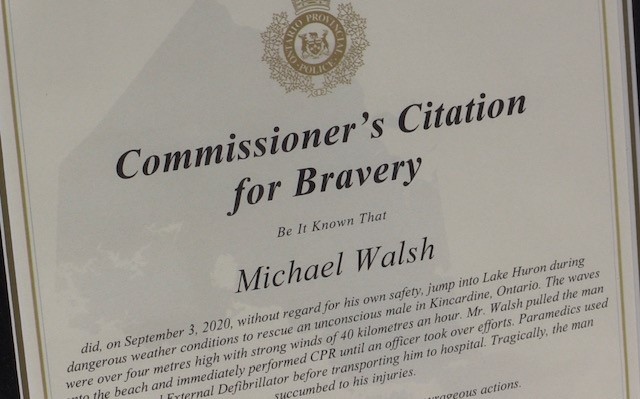 Commissioner’s Citation for Bravery for Mike Walsh’s actions in September 2020 for attempting to save a drowning victim in Kincardine, Ont. (Scott Miller/CTV News London)

For his efforts that day, Walsh received the OPP Commissioner’s Citation for Bravery. It was a bittersweet acknowledgement, since the man he pulled from the water succumed to his injuries.

Walsh, a lifelong Kincardine resident, said he’s seen far too many drownings and near drownings at this section of shoreline.

“It’s different for us here, because we know what the lake is like. Even on a day like today, you really shouldn’t be in the water,” he said.

But now a new initiative is underway this summer to measure wave strength, water temperature and beachgoer behaviour, in order to avoid another drowning tragedy — it’s called the Smart Beach Project.

“How can we encourage them to set up in safer areas? Dr. Houser and his team from the University of Windsor will be looking at all that information to be able to make recommendations that will save lives,” said Meaghan Fair, who is part of Kincardine’s Smart Beach project. 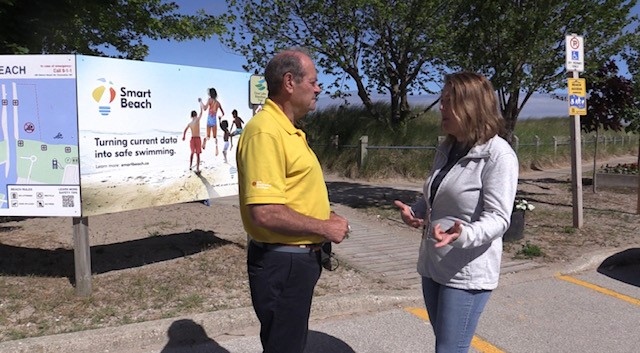 Five people have drowned in Kincardine’s waters since 2008, with many more near drownings.

While he appreciates the recognition for his efforts two summers ago, he and Kincardine’s first responders would rather not have to jump in and pull another lifeless body from the lake.

“We need tourists to come to Kincardine, and whey they come, they see the lake, and think that looks really fun. But, it’s deadly,” said Walsh.

Aleem Ramji — the man Walsh pulled from Lake Huron in September 2020 — was posthumously awarded a Commissioner’s Citation for Bravery for trying to save his cousins, after they were swept into the lake.

The first possible case of human-to-dog transmission of monkeypox -- recently reported in a couple and their pet in Paris -- had been a theoretical risk up till now, said Dr. Rosamund Lewis, technical lead on the monkeypox response for the World Health Organization.

Are you struggling to pay rent? We want to hear from you

With rental prices rising due to an increase in demand, CTVNews.ca wants to hear from Canadian tenants who may be struggling to afford their home.

Two infant products, manufactured by baby gear company 4moms, are being recalled due to strangulation hazards, according to a consumer product notice issued by Health Canada.