Bird watchers are amassing in a rural area near Aylmer, Ont., hoping to catch sight of a bird that is way off track.

The Swallow-tailed kite is native to South America, though it is frequently seen in the southern U.S.

Spotted a week ago, the arrival of the Swallow-tailed kitehas attracted human visitors from near and far. Each is jockeying for a position, waiting for the bird to repeat a pattern taking it to the spot they have gathered.

Karen Ma arrived from Toronto. “We got up like 5 a.m. to prepare all the things to come here,” she says. 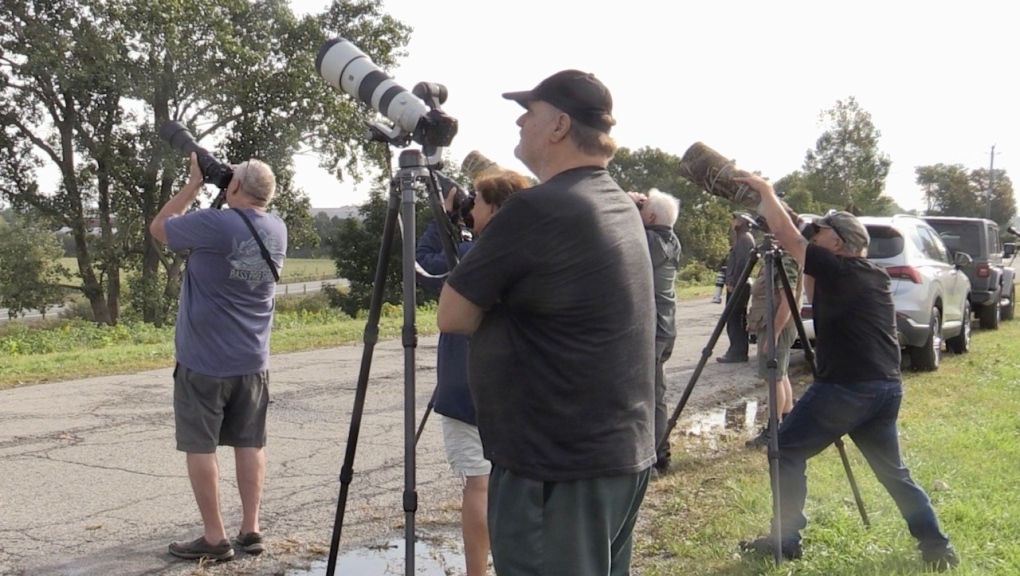 Some of the 'bird paparazzi' gather to capture a Swallowed Tail Kite near Aylmer, Ont., Sept 15, 2021. (Sean Irvine / CTV London) Gary Bishop, of London, was also up early and says, “I came out this morning a quarter to seven. Might be a bit too early, but I was told there were quite a few cars on the road, so I wanted to get a good spot. Hopefully, it comes."

After a good amount of waiting, just over the horizon, a wingspan was noted. The birders suddenly said in excited unison, “There he is!”

Among those taking pictures is Liz Norton. A bird photographer for years, she has long waited for this moment.

“This is definitely one of the best. It’s a lifer for me. I’ve never seen this before,” she explains.

And with all the excitement Bill MacDonald says it is fair for the bird to claim star status, while the people below are the paparazzi.

“He’s a celebrity. We don’t see them too often up here.”

And, as Gary Bishop, who waited for hours, finally got his chance to snap a picture of the Swallow-tailed kite, he was thrilled.

“I was almost ready to leave”, he told CTV News, “but I stuck it out and it was worth the wait.”

Toys, appliances and handbags: These are the items you may not get in time for the holidays

Experts are advising Canadians to start their holiday shopping early to avoid missing out on big-ticket items such as appliances, handbags and this year’s hottest toys as global supply chain issues continue to impact availability and price.

Anyone entering the House of Commons precinct -- including MPs -- will need to be fully vaccinated against COVID-19 as of Nov. 22, the Board of Internal Economy has ordered. The new rule starts on the day the 44th Parliament kicks off.