GODERICH, ONT. -- The Livery in Goderich, Ont. now has a potentially life saving defibrillator available for their patrons, when it's eventually allowed to have people back in the building.

“We’ve had instances, like every place of public assembly, where something like that would have been useful. Nothing fatal, thank goodness, but still, it’s something that really made use know about it,” says David Armour, president of The Livery.

This life saving piece of equipment used to restart hearts, in the event of a heart attack, is being donated to The Livery, by the Dave Mounsey Memorial Fund. The organization, in named after Dave Mounsey, a Huron OPP officer killed in the line of duty in 2006. This is donation 125. 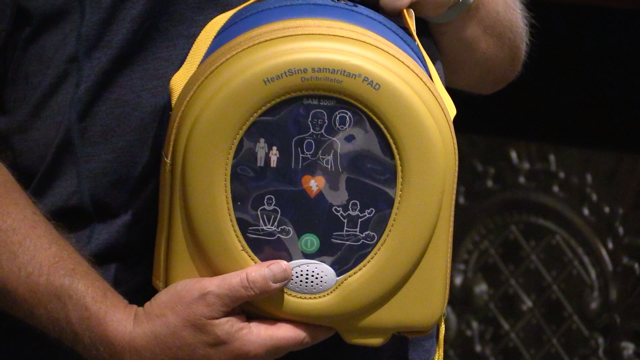 Defibrillator donation made to the Livery in Goderich, Ont. by the Dave Mounsey Memorial Fund on June 10, 2021. (Scott Miller/CTV London)

“We were only able to donate four defibrillators last year due to COVID, but we’re back now. Between the 100 kilometre walk and the virtual Run Around the Square, we’re looking to donate two defibrillators a month, going forward,” says Mounsey Fund founder, Patrick Armstrong.

While the charity bears Mounsey’s name, each specific defibrillator is donated in honour of a fallen Ontario police officer, firefighter, soldier, or emergency services personnel.

The Livery’s defibrillator is donated in honour of Det.-Cst. Robert Plunkett of the York Police Service, who grew up in Huron County, but was killed in the line of duty in 2007. 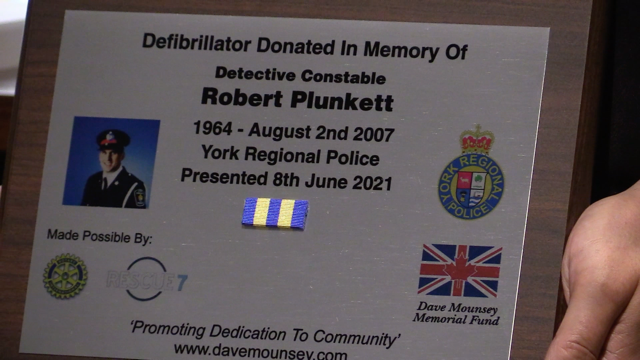 Defibrillator donation made to the Livery in Goderich, Ont. by the Dave Mounsey Memorial Fund on June 10, 2021. (Scott Miller/CTV London)

“We’re able to honour someone from Huron County who gave their life for the people of Ontario, and we’re back in Goderich for this donation, and this is where we started. So, anytime we can get back to Huron County, it’s sort of a coming home for us,” says Armstrong.

“It’s wonderful that there are people out there doing this kind of thing. Making it possible for every place to be accessible, and safe, and well provided for, in terms of emergency health care equipment,” says the Livery president, David Armour.

Three lives have been saved by the defibrillators distributed across Ontario, by the Dave Mounsey Memorial Fund.