At 9:59 a.m., fire fighters around the world stopped, and held a moment of silence to remember those who lost their lives 20 years ago in the deadliest terror attack in human history.

In Windsor, Ont. on-duty fire fighters did the same.

"We have a good portion of our workforce that weren't around at that time and maybe don't remember the same as some of us that were working," says James Waffle, deputy chief of operations with Windsor Fire Rescue Services.

"Not just that day but in that era and the camaraderie and the brotherhood and sisterhood that we saw. It is important to remember on on a yearly basis if not a daily basis what that meant to emergency services as a whole". 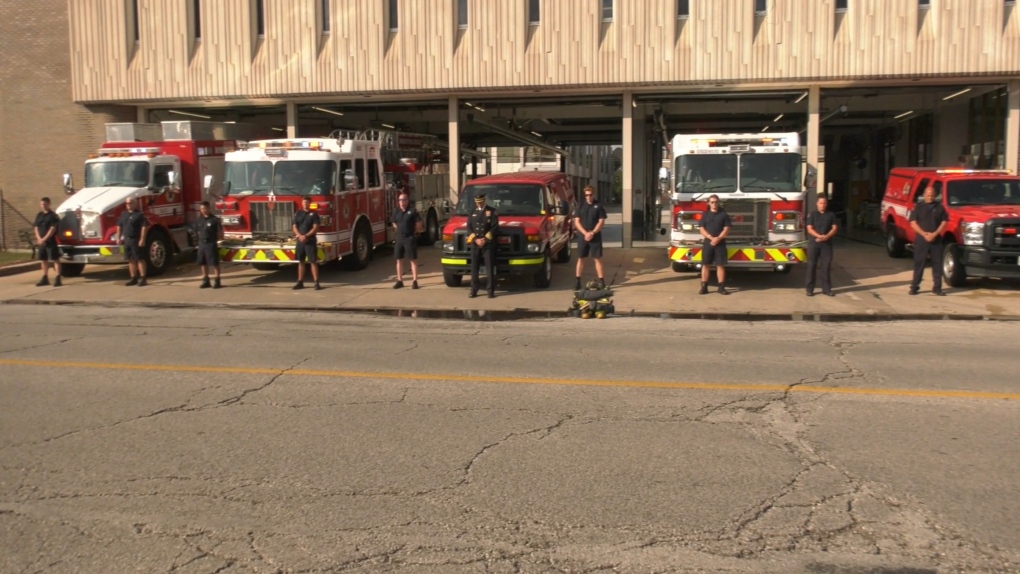 Windsor Fire and Rescue Services holds a moment of silence on Saturday Sept. 11, 2021 to honour those who lost their lives in the 9/11 Attacks 20 years ago.

The London Professional Fire Fighters Association (LPFFA) would typically hold a large gathering outside of No. 1 Fire Station to recognize the anniversary. Family members of fire fighters who lost their lives the previous year would be invited to receive the Martin E. Pierce Medal.

However this year out of an abundance of caution the LPFFA decided to post a video on social media, and go virtual instead of hosting an event.

"We encourage everybody to go on and look it's a little a little less than three minutes long," says Jason Timlick, president of the LPFFA.

"We think it's a very good tribute to the day and our fallen. We've had a few that passed away from occupational diseases which is covered under presumptive legislation, and we're honouring them and their families this year".

On Sept. 11, 2001, 343 fire fighters lost their lives when the World Trade Centre was attacked. Eight paramedics, and 60 police officers were also killed in a series of four coordinated terrorist attacks by the militant Islamist terrorist group al-Qaeda against the United States of America.

"What that tells us is the story of those that dedicate their lives to the uniform and how police, fire, EMS especially on that day in such incredible tragic circumstances and numbers race into certain danger, and unfortunately sometimes death," says Rick Robson, executive director of the London Police Association.

"My own officers recognize every day and their families recognize every day that they are putting themselves between harm, and other people. We've heard stories locally about the number of firearms and loaded firearms and weapons being seized here in London. Our officers and our canine officers are being assaulted at scenes. So what we see is a reminder that it's what officers do every single day they go out there and they put themselves in danger and I'm extremely grateful for the officers that do that in our behalf".

Timlick says he hopes next year they can resume an in-person remembrance for all those who lost their lives two decades ago.

Father of suspect in British MP slaying is 'traumatized'

The father of a man held for the fatal stabbing of a British MP during a meeting with local voters has told British media that he was shocked and 'traumatized' by his son's arrest, as police continued questioning the suspect under terrorism laws.

A group of 17 U.S. missionaries including children was kidnapped by a gang in Haiti on Saturday, according to a voice message sent to various religious missions by an organization with direct knowledge of the incident.