The GO Train has left the station, but few actually 'go'

The first GO Transit train to depart London left the VIA station Monday morning, however the new service, long sought after by commuters, attracted few customers.

About a dozen boarded the multi-car double-decker train as it departed London at 5:20 a.m. bound for Toronto.

It also made scheduled stops in other communities, for the first time, in St. Marys and Stratford, before continuing onto to Kitchener and Toronto.

Matt Llewelyn, a spokesperson for Metrolinx which operates GO Transit, did not focus on the lack of riders.

He says it’s not unexpected for a first trip that has had little time to be promoted.

“It’s an important first step, which is why we are taking things slowly”, he told CTV News London.

As it turns out, at least half of the riders on the initial ride were self-described "Rail Fans."

“This is going to be the inaugural trip, and I really wanted to be involved in this historical trip to Toronto.”

Londoner Ferrell Manalif was also riding to be part of history. He’s excited to see the service and hopes it lasts. 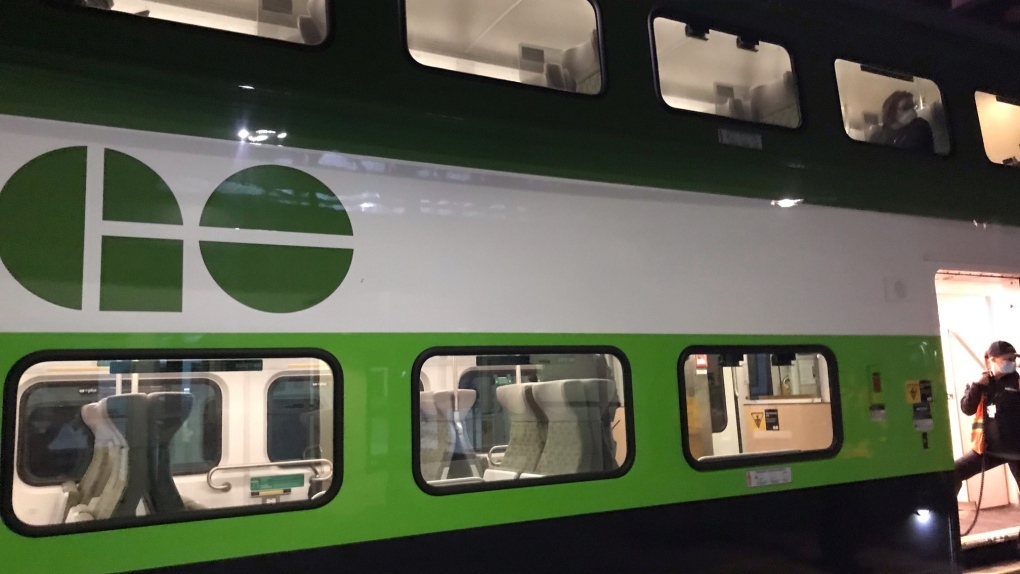 But, as many Londoners have already expressed, he says the GO needs to ‘go’ on the faster southern rail route to Toronto to be successful.

“I mean four hours for me is pretty much too long. But we’ll see if the customers love it. Maybe they’ll improve the tracks along the way.”

Both Manalif and Kynoch paid about $60 for the round trip to Toronto.

“I don’t want to pay $50 to go from here to Toronto. Yes, it is four hours, but I think a lot of commuters will enjoy the fact that they can get from London and work in Toronto once things go back to normal, post-pandemic.”

Llewelyn says the service will be enhanced as more riders utilize the service and offer feedback.

“We’re going to monitor the results on this pilot project and as those results come in, we are going to look for more opportunities to enhance our services and potentially bring more service to southwestern Ontario”.

The run from London to Toronto is a two-year pilot project for GO.

The evening train leaves Toronto at 4:19 and arrives in London at 8:17pm.

Interestingly as the service begins, a Via Train, using the Southern rail route to Toronto departed London one hour after the morning GO Train. It carried a larger number of passengers to the GTA in just over two hours.

Chris Childs of London, Ont. said he looked at the option of taking the GO Train but opted for VIA’s faster service, even though it cost him about $25 more than a GO ticket.

"Right now the VIA option is a lot shorter, if they cut that down I would probably choose that (GO Transit) instead."