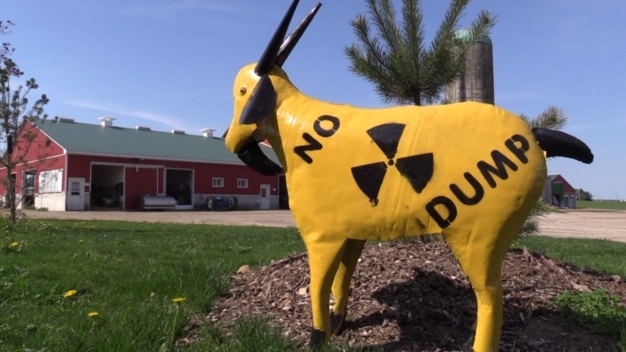 WINGHAM, ONT. -- Anja van der Vlies is worried about the future of her 1200 dairy goat operation, if Canada’s most radioactive nuclear waste is buried a couple side roads away from her family’s farm.

“It’s fairly close to where we farm. If I just look at the radius of 10 kilometres from the proposed site, so much food is being prepared here. What’s going to happen to that?”she says.

Right next door, dairy farmer Ron Groen has posted signs around his property sharing his concerns about the proposed project, just north of Teeswater.

“The waste is going to be radioactive for a million years, so basically the waste will be eternally radioactive and our kids, grandkids, 33,000 generations after us living in and around town will have to worry about this problem,” he says.

About 1200 acres of farmland north of Teeswater has been optioned by the Nuclear Waste Management Organization to potentially build Canada’s first permanent nuclear waste facility.

Over five million used nuclear fuel bundles, would be buried 500 metres under these Bruce County farms, if the community agrees to it.

Darren Ireland is one the landowners, whose agreed to option his land for the project.

“For me, it’s about five generations. This area has struggled for years to keep things going. I look at this as something, that we could be looking at for five generations, that’s huge,” he says.

The mayor of the municipality of South Bruce, Robert Buckle, also sees upside to the project.

“It will create jobs. So whenever we have an economic downturn, we will not be affected as much. Also, it will really help our tax base,” he says.

The project to house Canada’s most radioactive waste would create about 2800 construction jobs, and 700 jobs operating the site, which once built, would run for between 50 and 75 years.

“The plan is to monitor the underground structure for 70 years, and after that, they’re going to abandon the project and all the waste,” says Groen.

Signs opposing the project starting going up around the area around March. A local group has formed to keep nuclear waste out of South Bruce’s soil.

“The sooner we can stop this, the better for our community,” says van der Vlies.

Mayor Buckle says the municipality wants to hear from residents, as a potential decision looms.

“Let us know if they’re in favour of this project or if they’re against it. Because the majority of the public will decide in the end,” he says.

Two communities remain in the running to house Canada’s most radioactive waste. Ignace, in Northern Ontario, and the Municipality of South Bruce, north of Teeswater. One site will selected, no later, than 2023.