With COVID-19 restrictions still in place in Ontario, only a limited number of amateur athletes are able to train and compete.

Only those given 'Elite Amateur Status' by the government in the return-to-play framework plan can workout and play with their teammates.

One of the seven leagues given an exemption is the Ontario Scholastic Basketball Association, which includes the Southwest Academy (SWA) in London, Ont.

"We're just really fortunate to be able to get in the gym," says Lena Steinebrickner, who has aspirations of playing basketball at the post-secondary level.

While others including Ontario University Athletics (OUA) are sidelined, these high schoolers are able to take the court.

"I have a brother that plays high-level hockey, and I just think every day I'm so grateful that I'm able to get in here," says Keira Spencer, who is one of the team members being developed by Ontario Basketball.

With their home gym at Regina Mundi College (RMC) shut down while school was out, Southwest Academy have been using the privately-owned Playground London as training headquarters. They are scheduled to resume game action Wednesday on the road. 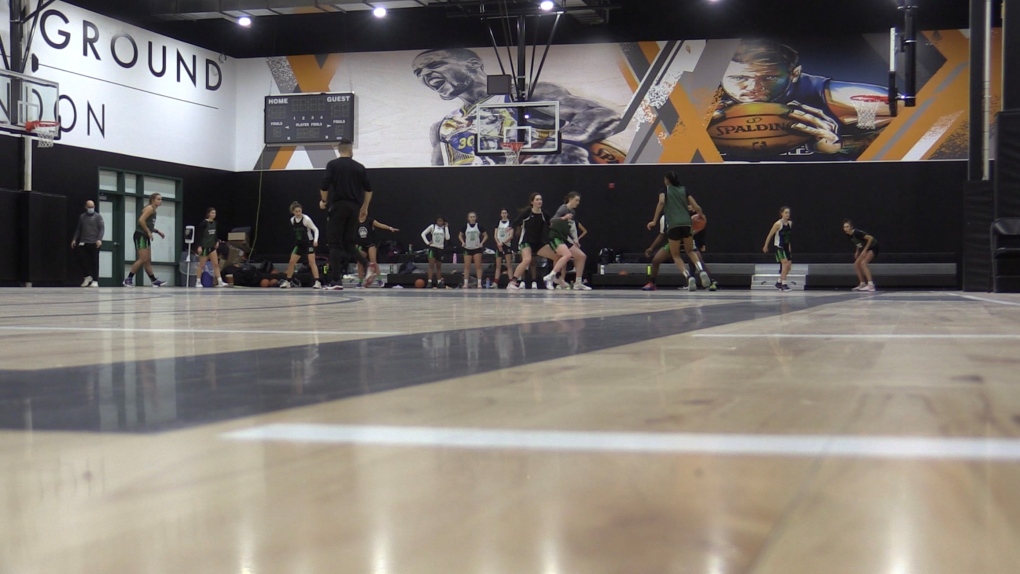 The Southwest Academy women's team practices at the Playground London in London, Ont. on Sunday, Jan. 16, 2022. They are members of the OSBA, which is one of seven leagues given 'Elite Amateur Status' by the Ontario Government.

"There's an unbelievable amount of protocol that's in place for us to be able to do this," says Rob Angione, the head coach of the SWA women's team.

"In our background, we've got a lot of support here to make this possible. Weekly testing, we've got our attestations we've got to get done, and then following the protocols of the various facility that we're able to train in".

This week, the young women were supposed to be in Cleveland, OH at a major tournament called Classic in the Country.

Angione estimates that closet to 100 NCAA Division One scouts would be in attendance to watch some of the top prep teams in North America.

"I definitely wanted to be able to get that exposure," says Spencer. "That tournament would have been great just be able to travel again, play basketball, but it's the safest move to stay here just in the current climate."

Angione says it "broke his heart" to withdraw from the event, "The border just made it almost impossible."

"Because of the importance of the academics for these young ladies, we couldn't risk it. A possible 14-day quarantine, and also with only five-and-a-half weeks left in our competition season, that puts us in a very difficult position."

He says it wasn't heading south that would have been a challenge, it was getting back home.

"With the how quickly Omicron is spreading, we were quite nervous that when we come back in, we could be, as a program, shut down for upwards of two weeks."

Angione feels blessed that his league is considered exempt and allowed to take the court, but does believe for the players in his program it's important to keep pace.

"We have five young ladies that are part of the national team assessment camp, and we've got girls competing for scholarships and this is a critical time," says Angione, who feels for everyone involved in the OUA, which includes a number of his former players.

Angione told CTV News London Monday that with school resuming, they can now access their home gym at RMC. They'll finish out this week at the Playground before using a combination of the two facilities going forward.

Their next home game is scheduled for January 25.

Rising global temperatures could reduce the amount of sleep people get every year, according to a new study.