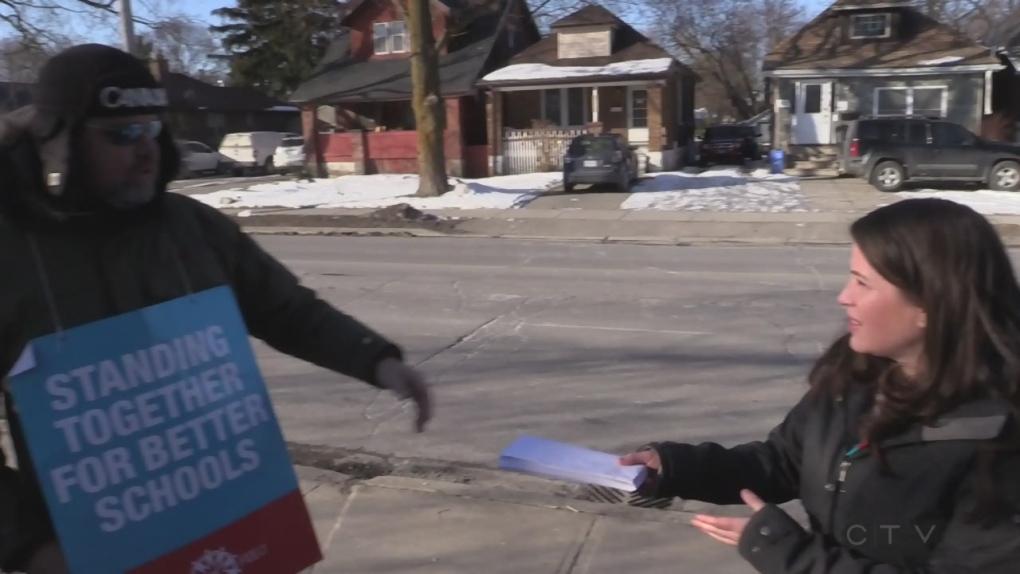 LONDON, ONT. -- Amid the competing messages from teachers unions and the Ford government, Stephanie Davis and Brandon Johnston wanted to send their own message.

Meeting teachers on the picket line Friday in front of East Carling public school in London, the couple handed over a bundle of envelopes. The envelopes contained childcare compensation payments received from the province that Stephanie Davis felt the teachers deserved.

"We feel, in our opinion, this money belongs to the teachers. It does not belong to us."

Davis says the Hillcrest teachers consistently go above and beyond for their son and other students. “You know, buying Kleenex, buying supplies, buying little rewards and incentives for these kids to do their best.”

One of the teachers gathered for the presentation expressed her gratitude as the envelopes were being handed over. "We can do what we do because of the support of parents like you guys.”

Stephanie and Brandon had considered buying coffee for the striking teachers, or some other similar gesture, but Brandon says they felt handing the money over sent a stronger message.

"By handing over this money we’re transferring the money that's given by the Ford government to the rightful owners, the teachers. This is a symbolic gesture between the public and the public teachers."

On Friday, Hillcrest teachers had joined others picketing in front of East Carling public school, located on Quebec Street near Oxford Street.

Fraser Allen is a Grade 7-8 teacher at Hillcrest and is the Elementary Teachers’ Federation of Ontario union steward at the school. "If I know my Hillcrest staff, they'll be re-investing it back into the classroom because we do put a lot of our own money into resources for the children to make our programs that much better."

Stephanie and Brandon say they understand that many parents will need to use their childcare compensation but they hope others will be able to find ways to support the teachers.