'It's the ultimate case of just senseless vandalism': London transit GM frustrated with rash of damage

Over the past week, over $60,000 in damage has been caused to London Transit Commission bus shelters.

"There were 24 as of yesterday," says LTC General Manager Kelly Paleczny.

The original damage had been repaired earlier this week, only to have some of those shelters revisited and vandalized again.

“My understanding is two of the ones that had been repaired have already been re-broken, that happened last night, so we’re up to 26 now.”

It was just September of 2020 when there was another rash of vandalism where over 20 shelters were broken and the costs add up, but there is a more immediate impact the vandalism creates

“Yes it’s a headache for us, and it’s costly, but it’s frustrating for our riders who are stuck on a day like yesterday standing in the pouring rain while they are waiting for their bus because the shelter has been damaged,” says Paleczny.

London police released a map of where the damage was reported over the past week, and if caught the vandals would face serious charges. 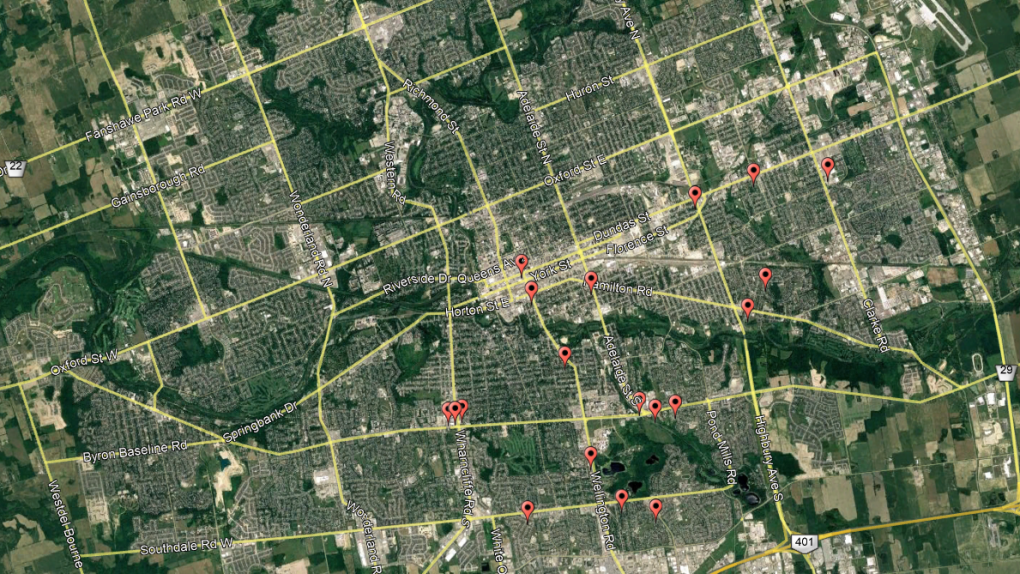 London police provided this map of where the damaged shelters are located.

“We’re looking at multiple occurrences of mischief involving property damage, and right now we’re appealing to the public. If you saw anything, if you know anything at all, please give us a call,” says Const. Sandasha Bough.

According to Paleczny, many have suggested switching to a plexiglass format, however she says that is a problem in terms of safety.

“Not only is it subject to clouding, and you can scratch it. Which means a different type of vandalism which would lead to also needing to be replaced. And if parts break off of those, the edges can be jagged which is dangerous.”

There are no easy answers for this problem according to Paleczny, but the causality always affects the bus users, and that is unacceptable.

The story of how the groundbreaking mRNA vaccines were developed to help the world fight COVID-19 is a fascinating one — but it’s been missing a key part, according to a scientist who says a fundamental aspect of these vaccines was originally developed by a small team in Canada.

Germany's centre-left Social Democrats won the biggest share of the vote in a national election Sunday, narrowly beating outgoing Chancellor Angela Merkel's centre-right Union bloc in a closely fought race that will determine who succeeds the long-time leader at the helm of Europe's biggest economy.

Businesses, schools and cities to observe National Day for Truth and Reconciliation

Businesses, cities and schools across Canada are preparing to follow the federal government's decision to observe the day, in some cases stepping up because provinces won't.

'Moulin Rouge! The Musical,' a jukebox adaptation of Baz Luhrmann's hyperactive 2001 movie, won the best new musical crown at the Tony Awards on a Sunday night when Broadway looked back to honour shows shuttered by COVID-19, mourn its fallen and also look forward to welcoming audiences again.

The Rolling Stones launched their pandemic-delayed "No Filter" tour Sunday at the Dome at America's Center in St. Louis without their drummer of nearly six decades.

Japan's ruling party votes on Wednesday for the country's next prime minister in an election that has turned into the most unpredictable race since Shinzo Abe made a surprise comeback almost a decade ago, defeating a popular rival in a runoff.