'I was barely alive': Workers return to site of London, Ont. building collapse on one-year anniversary

It was an emotional morning for Jacob Hurl who was joined by family members as they put flowers at the curb of 555 Teeple Terrace in London, Ont.

It's the site where workers John Martens, 21, and Henry Harder, 26, died when an apartment building collapsed during construction.

"This is a grave of two young men," says Hurl, who was injured in the collapse.

"Two young men that lost their lives and many others that almost did.”

Hurl was badly hurt, but has recovered.

"I was pinned in the building for four and a half hours," says Hurl.

"I was barely alive. When I got pulled out of there, I had tourniquets around my legs and I there were thoughts that I was gonna lose my leg for about a 24-hour period. I remember saying to myself, I can't die. I need to stay alive.”

Hurl lived, and so did another concrete worker thanks to a heroic effort by Roland Kovacs. Kovacs was in the basket of a boom lift when the building collapsed from the fourth floor to the main floor.

He didn't think to run, instead rushing to the aid of a man he didn't know.

"I never know who was (the) person I'd rescued," says Kovacs.

"Then finally, just yesterday, he contacted me and it's an amazing feeling to know who was the person and the fact that he's doing okay.”

Kovacs received a very heartfelt letter from the concrete worker named Jim, who thanked him, provided his contact information and one day hopes to meet him.

During the collapse, Kovacs was not harmed physically, but struggled for at least the first month after the ordeal.

"I saw a lot of things that not everyone saw," says Kovacs.

"Just maybe the guys who got trapped. Me and my wife definitely went through a hard time.”

Another injured worker, Travis Jaklitsh of New Hamburg, Ont. is recovering as well.

Five days after the collapse, Jaklitsch told CTV News he, "felt like he got hit by a transport truck.”

He had a broken ankle, fibula fractured ribs, and burns to his face and back.

"He's trying to move forward with his life and he has healed very well, but the trauma will stay forever.”

To honour everyone involved, 30-year construction worker Dave Murray was the first to hang a vest at the site last year. He was back again Saturday after seeing the memorials catch on at homes and sites up to hundreds of kilometres away.

"The movement says people are paying attention and they're watching this and their hearts go out to these families," says Murray, whose sons are also construction workers.

"The construction industry is following this and we don't want it to get swept under the rug, right. We want the victims to know that they're not alone and they're not forgotten.”

Those inside the building on Dec. 11, 2020, along with members of the London and District Labour Council held a moment of silence at 11:45 a.m. Saturday.

That is the exact time that the building came down.

"We see in far too many cases historically, where workers go to work and are never able to return home," says Patti Dalton, president of the London and District Labour Council (LDLC).

This week, eight charges were laid in the building collapse. Two companies and one individual face charges under the Occupational Health and Safety Act.

Despite the charges laid by the Ministry of Labour this week, Dalton believes it wasn't a transparent process.

"They waited too long to bring these charges forward," says Dalton.

Hurl says he plans on fighting for the rights of workers, and standing up to the government.

"I think I'm going to become an advocate for worker safety," says Hurl.

"I've kind of been doing that lately and I really enjoy it. It's kind of a passion of mine now.”

Construction continues inside the "Nest on Wonderland' at 555 Teeple Terrace, and apartments are listed for rent online. 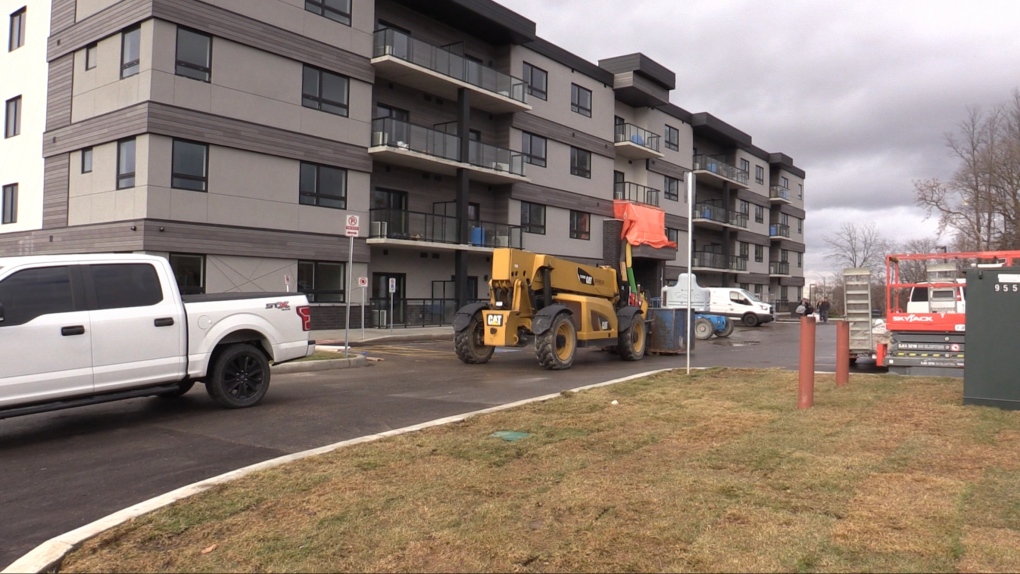 The Nest on Wonderland is nearly complete, and apartments are available for rent online in London, Ont. on Saturday, Dec. 11, 2021. (Brent Lale/CTV London)