A century-old building in Seaforth will likely have to be torn down following an overnight blaze.

The Queen's Inn, located at Seaforth's main intersection, is only a shell of itself as of Monday morning after fire ripped through the third floor.

Fire crews got the call around 11:30 p.m. Sunday night. After ensuring no one was inside the old hotel-restaurant, crews attempted to limit the spread of the fire.

They put out the flames, but the water they used to put out the fire - and a brief but intense thunderstorm - collapsed the entire third floor down into the building.

"So I went out the front door and, whoa," Watson says. "There were flames shooting up above the second window. Up on the very top floor, the smoke was just billowing out."

While it's too early to officially rule out arson, Huron East Fire Chief Marty Bedard says there isn't anything right now to suggest the cause of the fire is suspicious in nature.

Estimated damage is between $400,000 to $500,000. The owner of the massive building was not home at the time of the fire, in fact, he's away on vacation, and is now coming home to decide his buildings fate.

“Everything has collapsed in. With a lot of the water we put on it, the fire damage,  the roof, everything has come down inside. We haven't had a look inside yet but I suspect there's a lot of damage inside as well," Bedard says.

In April 2013, another old iconic downtown building was destroyed by fire in Seaforth. The town's only grocery store burned to the ground last year. It's since been rebuilt.

There's much discussion about whether the Queen's Inn should be rebuilt or not. It was a beautiful building, but it was vacant and for sale at the time of the fire.

“It's been empty for many, many years. It's iconic, it looks nice, but we can take a picture," says Seaforth resident Jared Gowan.

Rhonda English hopes it won't be torn down. "I really hope it can be restored." 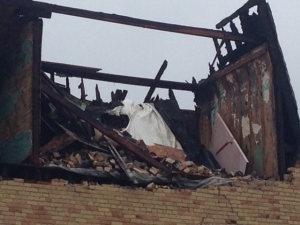