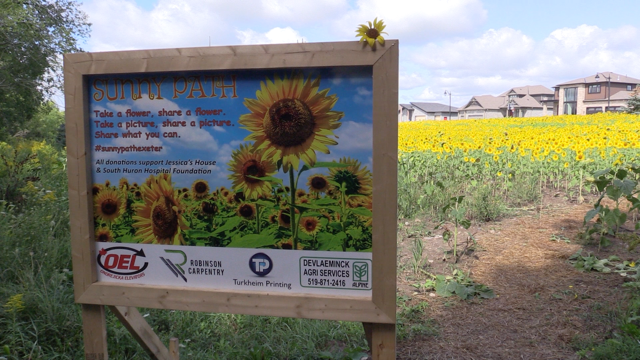 What used to be a sea of dirt and rocks, is now a sea of sunflowers, in Exeter

“You’re looking at Sunny Path Exeter. It’s a bunch of vacant lots that we thought would be nice for the community to have something nice to look at,” says Katrina Robinson, one of the driving forces behind the project.

Earlier this summer, Robinson Carpentry and Ondrejicka Elevators decided to turn some vacant building lots at end of Hazelton Lane in Exeter, into something beautiful. The first planting of sunflowers didn’t take, but the second one did, leaving behind a field of yellow positivity.

“People can just come up the Morrison Trail or meet at the end of Hazelton Lane, here in Exeter. They can walk through, if they want. We cut a path and laid down some straw. People can take pictures. We’re encouraging them to take some sunflowers home, or share them with somebody that needs their day brightened,” says Robinson.

Exeter’s newest community sunflower patch may not last long. Robinson says the flowers typically last for 20 days, and they blossomed, a little over a week ago.

“It’s something to do in our small little community, and it’s kind of a nice way to give back,” says Robinson.

Donations are being accepted for Jessica’s House in Exeter and the South Huron Hospital Foundation. So far, $500 has been raised, but the lifting of community spirit has been invaluable,” says Robinson.

“There’s not a lot to do during Covid and we get a lot of traffic off the Morrison Trail, so we thought we would plant something that looks appealing,” she says.

Depending on how this year and next year’s building seasons go, the sunflowers covering these vacant lots, could be back next summer. Devlaeminck Agri-Services and Turkheim Printing, were also part of making Sunny Path, a reality.