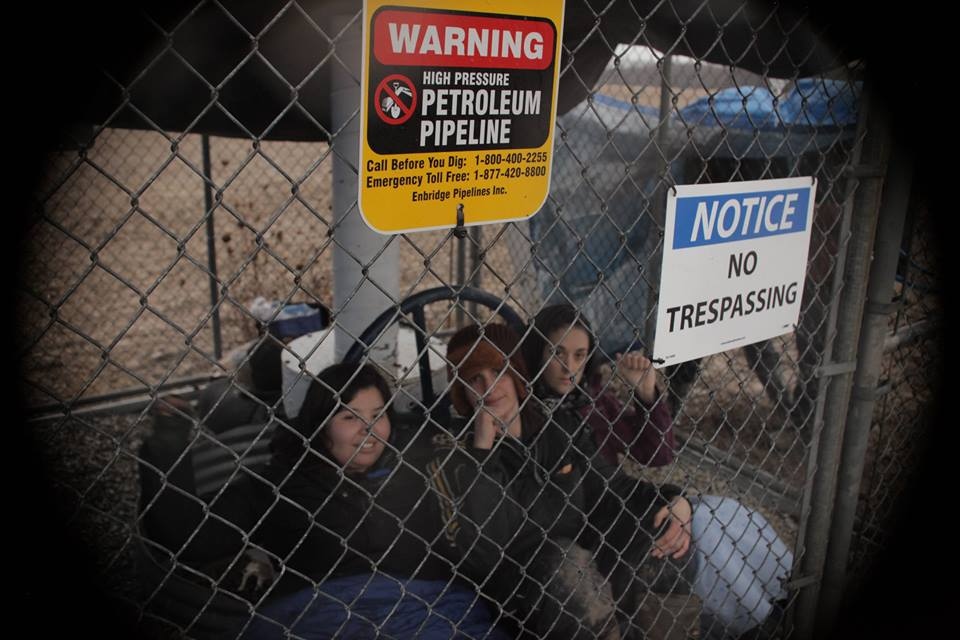 Protesters temporarily shut down Enbridge's Line 9 at a site in Sarnia, Ont. on Monday, Dec. 21, 2015. (The Indignants / Facebook)

Three people were arrested in Sarnia following a protest of Enbridge's Line 9 pipeline on Monday morning.

Line 9 is a mass oil pipeline that flows underground from Sarnia to Montreal. It's been the centre of controversy for many aboriginals and environmentalists.

Supporters of the protesters say a manual hand wheel was used to interrup the flow of oil about 7:30 a.m. Monday for two hours.

"There's a valve, and you turn it, and that's it. It's off. Anyone could have done this, anyone," says   Lindsay Gray, who supports the protesters.

Enbridge says it shut down the pipeline, not the protesters, to ensure public safety.

Sarnia police say three women were in a fenced enclosure belonging to Enbridge on Mandaumin Road.

Investigators say the women had secured themselves to the valve and tampered with equipment contained within the compound.

They were freed and then arrested.

Gray says the protesters did this to raise awareness about what they say are the dangers of Line 9.

Pointing to a spill in the United States along the same system, they fear a rupture is likely.

"People should get used to hearing this because we do not want this in your community, and you shouldn't either. You are not going to benefit from this," Gray says.

Two women from Guelph, ages 28 and 29, and a 23-year-old Sarnia resident, are all facing charges of mischief over $5,000 and mischief endangering life.

The 28-year-old is also facing a charge of resisting arrest.