LONDON, ONT. -- Tire tracks litter the parking lot of the Forest City Community Church after what appears to be a gathering of car buffs.

Photos and video sent to CTV News on Tuesday appear to show vehicles doing donuts and burnouts in the parking lot of the church on Bostwick Road in the city's southwest end.

Tracks of burned rubber from dozens of vehicles were left behind after the get together on Monday night.

Area residents say they reported the noise, and it appears it’s not the first time this has happened.

Social media posts from a week ago show similar images.

That gathering was reportedly to honour the death of a 22-year-old London man who died May 4 in a motorcycle crash. Police reportedly responded to break up the gathering.

Forest City Community Church Senior Pastor Rob Hogendoorn says after hearing about the circumstances leading to the first event they tried to be understanding.

“We understood some of the rationale for the first gathering. Not super happy about the damage, but we understand people are troubled and people are feeling bad about something. But it’s not an appropriate way to, you know, just leave damage. We would sure love to see that stop.”

But when others came out to do it again, church officials knew they would have to get police involved. They have since filed a report and London police Const. Sandasha Bough says they are appealing for members of the public to contact them if they have information at 519-661-5670. 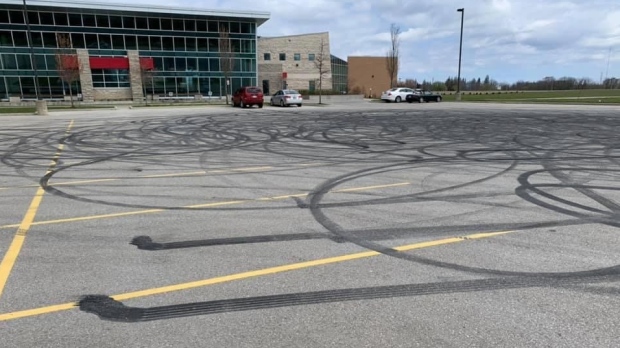 Tire tracks were left behind after a gathering in the parking lot of the Forest City Community Church. (Source: Cory Boyd)

Hogendoorn doesn’t know what the damage estimate is at this point, but he says it appears the church will have to take further steps to make these types of gatherings less appealing.

They’re considering putting cement barriers between parking lanes to reduce the ability to do donuts and burnouts in the lot.

But he says that will mean further expense to the church.

It is unclear if the incident has been reported to the city's tipline for COVID-19 order violations.

Under the provincial Emergency Act, gatherings of more than five people are not allowed at this time.