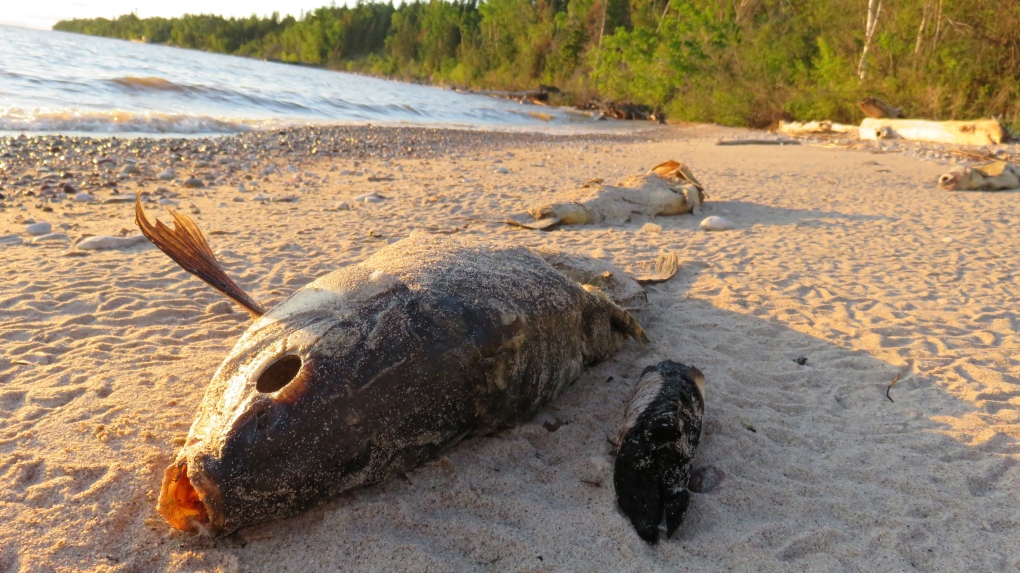 Dead fish have been washing up on the shores around Lake Winnipeg. (Submitted: Geraldine Horbas)
Middlesex Centre, Ont. -

The Ausable Bayfield Conservation Authority (ABCA) says a number dead fish being spotted at the Parkhill Reservoir is 'not uncommon.'

According to officials, staff visited the site and found only carp are affected, and similar situations have occurred in locations like Pittock Lake in Woodstock and in Lake Winnipeg in Manitoba.

“The fish that died at Parkhill Reservoir are all of the same species and seem to be the same size class,” Mari Veliz, ABCA Healthy Watersheds manager, said in a statement. “The Carp species is known to have die-off episodes so that is relevant...If there were more species that might indicate a more widespread issue.”

A virus specific to carp, extreme weather, or a combination could be responsible, though the ABCA says a virus is believed to be the culprit in this case.

The virus isn't believed to affect other fish, animals or humans, but people should wash their hands if they handle the fish and those that wash up on shore should be disposed of.

The ABCA started receiving reports of dead fish July 28, with a few dead fish washing up on shore each day, and are thanking the public for keeping them informed.

LIVE at 3:30 MDT | Shandro to be replaced as Alberta health minister in Kenney cabinet shuffle: sources

Liberals return to Alberta, and 5 other surprises in the election results

CTVNews.ca looks at some of the biggest surprises of election night, including the ouster of three cabinet ministers.

OPINION | Don Martin: Sooner or later in this status quo mandate, Justin Trudeau will take his walk in the snow

It might take a year or longer before it becomes clear to him, but Prime Minister Justin Trudeau will eventually realize he’s finished, Don Martin writes in his exclusive column for CTVNews.ca.

There are a number of young pregnant women battling COVID-19 in intensive care units across B.C., all of them unvaccinated, according to health officials.