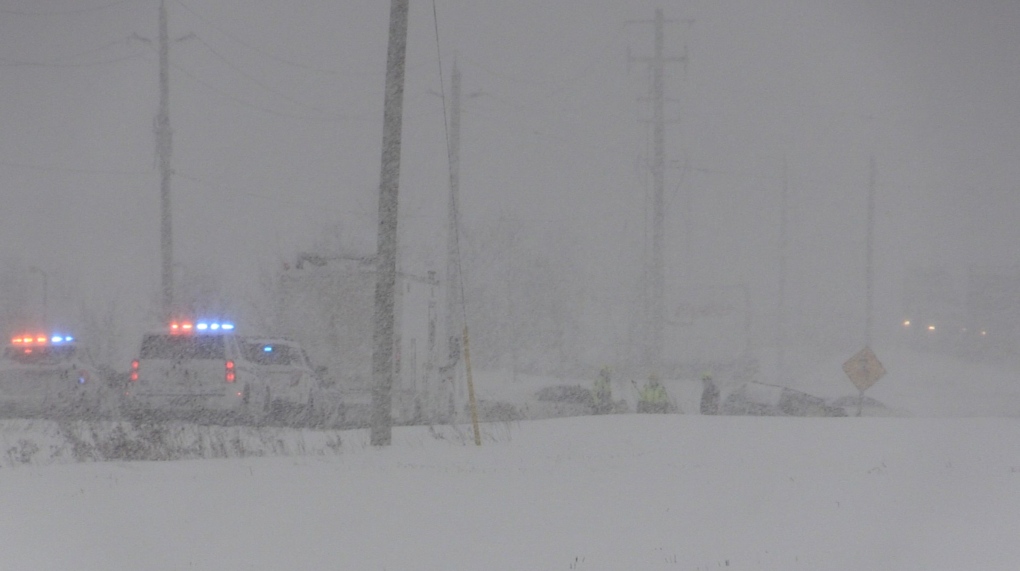 A serious motor vehicle crash in south London, Ont. is being investigated by police.

The crash was reported around 2:50 p.m. with emergency crews responding to the area of Highbury Avenue and Westminster Drive

According to police, one driver was transported to hospital by paramedic services.

Highbury Avenue between Westminster and Scotland drives is now open in both directions after being closed for a few hours.

The agency says snow squalls could cause slick road conditions and poor visibility.

Wingham - Blyth - Northern Huron County and Grey-Bruce are under a snow squall warning.

Motorists should always drive according to the conditions.

U.S. President Joe Biden and first lady Jill Biden paid their respects Tuesday at a makeshift memorial to the 10 people killed in the white supremacist attack in Buffalo, confronting again the forces of hatred he once said called him back to seek the White House.

Calgary police said in a statement issued Monday they have identified a suspect wanted in an incident that resulted in the death of a Calgary mother of five.

The body of 17-year-old Brittanee Drexel, who disappeared while visiting South Carolina's Myrtle Beach on spring break 13 years ago, has been found and a sex offender has been charged with murder, kidnapping and rape, authorities said Monday.

Today, there are two pieces of Quebec legislation that target religious and linguistic minorities. While he often talks about rights, Justin Trudeau has chosen to stand there, arms folded, and do nothing to defend people whose freedoms are being affected. He appears to be afraid of displeasing François Legault, writes former NDP leader Tom Mulcair in his latest column for CTVNews.ca.

Prime Minister Justin Trudeau says a soccer friendly between Canada and Iran next month in Vancouver is ill-advised. The merits of hosting Iran were raised by a reporter, citing families who had lost loved ones on Ukraine International Airlines Flight 752.

Queen Elizabeth II made a surprise visit Tuesday to a train station in central London to see a newly completed subway line named in her honour. The 96-year-old monarch, who has reduced most of her public engagements, appeared Tuesday at Paddington Station.