What is considered a living wage in London? New report has the answer

LONDON, Ont. -- Using a “living wage” to lift society; that is the approach being promoted by the London Poverty Research Centre at King’s University College.

The centre is hoping its London Living Wage 2019 report will inspire employers to pay a little more.

Centre Coordinator Michael Courey says the centre’s research finds that in a family of four with two children aged three and seven, both parents need to earn a full-time wage of $16.20 per hour to achieve economic security.

"We're treating this notion of living wage as one tool among several that should be used in our city for local economic development, for raising the bottom of our community up."

The living wage calculation is based on the various expenses faced by a family like food, transportation and child-care, but also factors in tax breaks and government supports.

According to Courey, "It's the beginning of conversations around what do we need to do as a city. As employers how can we ensure that we're creating a more resilient city for the future."

These calculations have been made for communities across the province under the umbrella of the Ontario Living Wage Network, with London having the lowest living wage threshold in the province.

Some have questioned whether adopting a living wage adds inflationary pressures, raising the cost of goods and services for everyone.

Courey says research doesn't support that, “It's not a one-to-one relationship...there's a lot of elasticity in that. As we increase that minimum wage, it doesn't translate into a full increase in inflation."

And Courey warns that, due to data lag, the 2019 living wage figure likely doesn’t fully reflect the dramatic increase in housing costs.

In fact, he says, there are community benefits because lower-wage workers will spend money in their own community.

“It can have a great effect in terms of the local economic resiliency, this notion that as we pay people at the lower wage level that they're going to spend that money more in the community."

Fifteen employers in London have adopted a living wage approach, with the United Way the most recent to sign up. 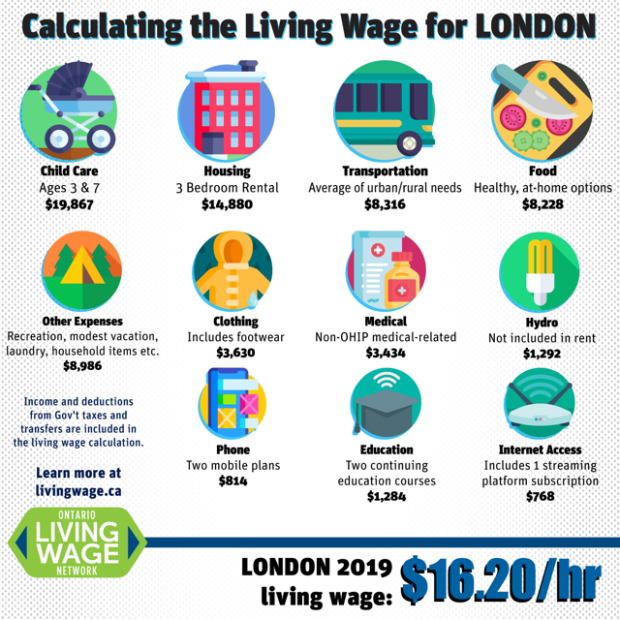