Tom Hennessy is a London, Ont. veteran of the Second World War who achieved local fame earlier this year. At the age of 100, he walked 100 miles in support of much younger veterans in need.

But Tom’s own story of service is just as remarkable.

This Wednesday and Thursday, in extended reports on CTV News at 6, Tom will share memories of harrowing moments in the wartime skies.

He will also express his concerns about current political tensions and how he hopes a world war never comes again.

“When are we going to learn that [in] war that nobody wins? Why can’t we have peace?” Tom asked CTV News London’s Sean Irvine during an emotional 90-minute studio interview.

As CTV News London first reported in June, Tom piloted a Spitfire fighter aircraft between 1941 and 1945.

Tom, a native of Ireland, left the neutral republic to join England’s fight for survival in 1941. He joined the Royal Air Force (RAF) to follow in the footsteps of his brother who died in service, just as the war broke out. 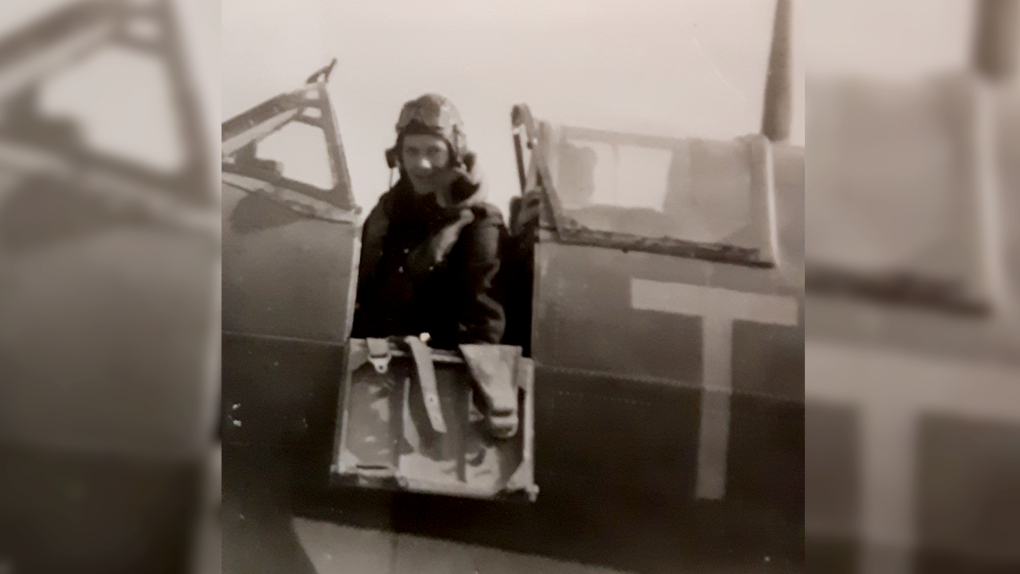 Tom Hennessy is seen inside the cockpit of his Supermarine Spitfire in this undated image. (Submitted)

“He was the only brother I had,” he says. “Those things I guess you never lose.”

The Battle of Britain had concluded six months prior, but the Allies were still facing a powerful Axis threat.

As a result, Tom and many other new pilots were put on a ship bound for Canada — however, it was all a decoy.

Shortly after they arrived in Canada, they were given civilian clothes and sent to the United States to learn to fly. It was mid-1941, and America had not yet joined the war.

On his way to the U.S.A., Tom recalls making a whistle-stop in a small Ontario city named for the capital of England -- London. He didn’t know it at the time, but one day he would call the city home.

Arriving in Oklahoma, Tom took his first flight. Ironically, he didn’t really want to be a pilot.

“I was just terrified. I thought, if I could [come] home to mother, I’d go today,” he recalls.

Just as Tom returned to England for active service, America was attacked at Pearl Harbor, and he knew the tide of war had changed.

Back in the U.K., Tom initially flew missions to chase German reconnaissance planes over Northern Ireland and parts of England, where he saw little action.

But that changed when his squadron switched to running missions over France.

He frequently had to fly “on the deck,” or very low, to avoid German radar. He also had plenty of flak targeting his plane.

“You just see flips like this,” he explains, motioning flak blast with his hands. “But you don’t realize, in a way that that is metal breaking up. But if you got a direct hit, you’d sure know it. You just fly through it that’s all.” 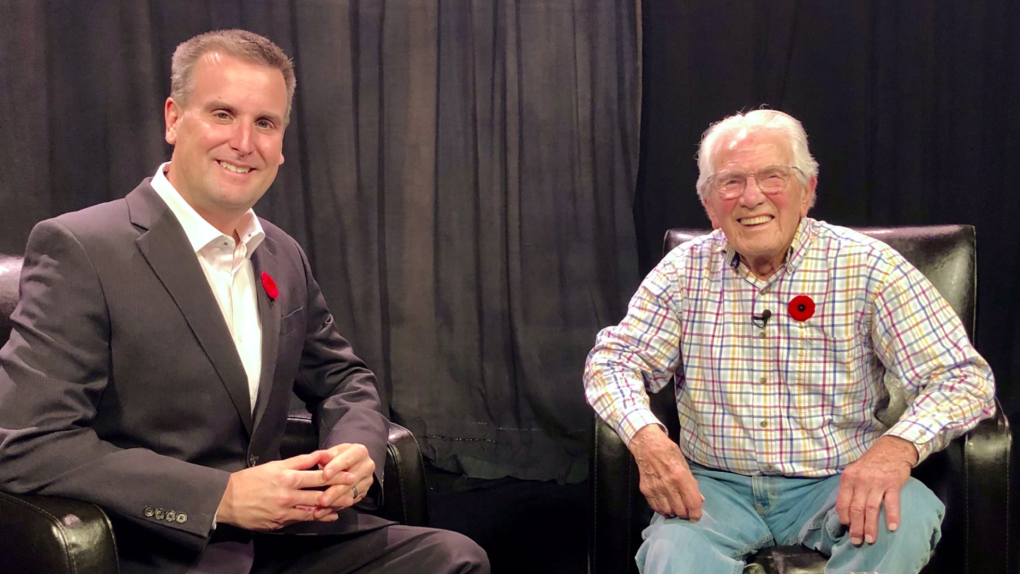 It was around this time, Tom began noticing some planes in his squadron were not returning from missions. Yet senior pilots, who had lost so many friends in the Battle of Britain, taught him never to say a certain word when a pilot didn’t return.

Transferred to the Battle for Italy, Tom nearly lost his own life fighting to protect British Malta. Tom had just completed a dogfight and was heading back to base. But in the rush, he’d forgotten to check his mirror.

The pilot of another German Messerschmitt BF-109 had Tom’s Spitfire in his sights.

“I saw these bullets coming across my wing. I didn’t bother looking back, I knew I was caught,” he says.

Tom quickly dove, as it was his only chance to save himself and his plane.

“And that’s as close as I ever want to come,” he says. “I never forget my mirror after that!”

A fact so true, Tom says he still triples check his mirror while driving.

Tom’s time in his Spitfire ended just as World War II came to a close.

He says during the fight, he never absorbed what he had been through.

But on his way back to England, on the deck of a ship, he broke down in tears. Some were for gratitude to have survived. Others were for sadness at the loss of some may he had served with.

After all, many of his fellow pilots never returned from missions.

“Yeah, the war may be over. But it’s really over for Cliff, it’s over for Burt, for Barry. Those guys didn’t get through it,” he says. 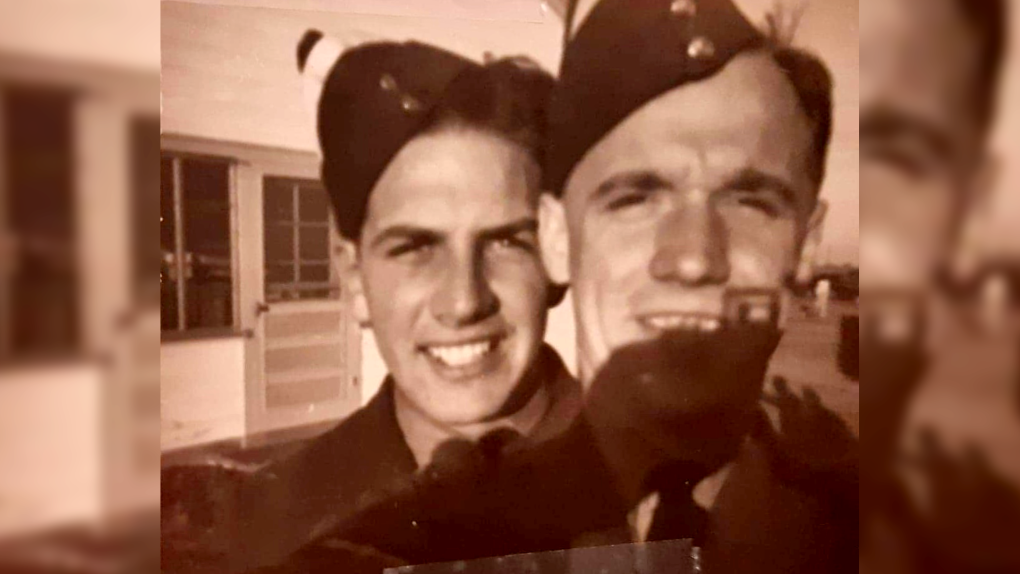 Tom Hennessy is seen with his late friend, and fellow Supermarine Spitfire pilot, Jake in this undated image. Jake was shot down over Italy during WWII. (Submitted)

The biggest loss was his best friend Jake. Tom and Jake trained together in Oklahoma and served in multiple theatres in the same squadron. Jake had been shot down over Italy.

“He was so in love with this girl in Oklahoma,” Tom says. “And he was going to back there.”

After the war, still suffering from survivor guilt and limited post-war career options, Tom looked for a new path in England.

He found a literal sign to one while visiting London, recalling, "I saw a sign that said come to Ontario.”

In time, he settled in London, found a career in teaching, had children and found the love of his life, Joyce. They have been married for 45 years.

Tom also began a daily regime of physical fitness, the very subject he oversaw as a supervisor in London-area schools.

For decades, the war remained hidden inside his mind.

But a few years ago, as his wartime colleagues passed, he realized he is a living representative of the Second World War, in which many visualize those they loved or admired through him.

“They don’t see you. They’re seeing what they know of it, whether their father, their grandfather, or their loss, or whatever it is,” Tom explains. “It’s not you.”

In the end, Tom is honoured to represent them.

“I feel today, that I am so lucky, thankful really, to have gotten through that when so many didn’t,” he says.