By the 11 a.m. start time, there were about 60 cars lined up in the drive leading to Oakridge Arena at 825 Valetta St., with some spilling out onto Valetta.

"There is no divide now. We have to protect each other," says Janet Loughheed. She lives near the arena and was out walking her beagle, Ben, as vehicles filtered in.

Loughheed studied Health Information at Western University and says people need to understand the importance of these preventative measures to keep people from clustering in emergency departments, urgent care centres or clinics.

"Which would you rather have? The disease coming into your front door? I wouldn't. I want to know who's got it and let them self-isolate."

The assessment centre is a joint initiative operated by the London Health Sciences Centre, St. Joseph's Health Care and the Middlesex-London Health Unit.

One man, Gerry, drove his neighbour to the centre. His neighbour has been prone to pneumonia and that concern resulted in him being moved to the second phase of assessment inside the arena itself.

"They took his name and number and they sent him a text right away. We had to sit and wait in the vehicle until he got another text and then he was able to go in. So he went in and now he's inside being assessed."

Kirk Patterson was out with his daughter and grandson at the playground next to the assessment centre. A former cancer patient, Patterson is at higher risk with a compromised immune system.

"If people are concerned - having, perhaps, been in contact with individuals or been out of the country - why not get tested?"

Shortly after the noon hour the lineup of vehicles had evaporated, with only the occasional car coming through.

Or concerned residents can call Telehealth at 1-866-777-0000 for a telephone assessment. The Telehealth line is geared to people who have symptoms that include a fever and/or cough and any of the following conditions having occurred 14 days prior to the illness: 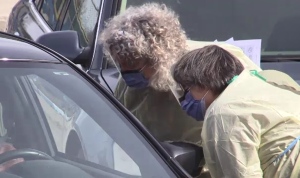