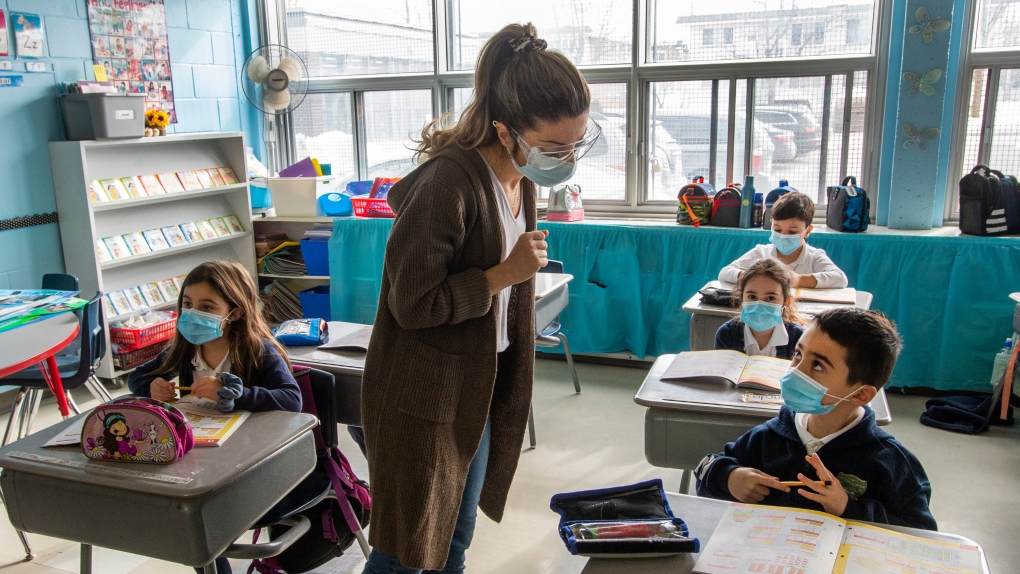 Teacher Elisa Infusini and her grade one students wear masks as they attend class, Tuesday, March 9, 2021. (THE CANADIAN PRESS/Ryan Remiorz)

Public school trustees with the Thames Valley District School Board (TVDSB) have approved a mask “requirement” that can not and will not be enforced.

On Tuesday evening, trustees spent the better part of two hours debating and trying to wordsmith a motion intended to temporarily increase the number of students, teachers and staff that wear masks during the sixth wave of the COVID-19 pandemic.

“Help each other ride this wave down. And this motion is an opportunity to do just that,” explained Trustee Corrine Rahman who drafted the motion based on language in the Ottawa-Carleton School Board’s new mask requirement.

Specifically the motion reads, “that the Director [of Education] require from an Occupational Health and Safety perspective, mask use for all students, staff and visitors in all TVDSB buildings until such a time as Public Health Ontario updates this guidance, or the local public health units in TVDSB explicitly advise otherwise.”

Exemptions would not require medical documentation.

The school board’s lawyer warned, however, that they lack the authority to enforce an indoor mask requirement after the provincial government lifted its mandate last month.

“Prior to March 21 there were certain steps that could be taken, but after March 21 there is no enforcement mechanism,” explained TVDSB General Legal Counsel Ali Chahbar.

Several trustees said that the Ministry of Education had offered similar advice.

Attempts to wordsmith the mask requirement into a mask recommendation were rebuffed by Rahman who said the motion’s intent was a supportive approach to temporarily increase masking.

Administration informed the board that staffing schools remains a daily challenge, but daily absences are down compared to recent peaks.

Last week, the medical officers of health from Middlesex-London and Elgin County both told the board they strongly encourage wearing a mask indoors.

“All our public health officials are recommending masking,” said Trustee Sherri Moore to her colleagues, “Instead of opting-in to wear a mask, we should be saying you need to opt-out.”

Trustees narrowly approved the mask requirement by a vote of 7 to 5.

Rahman compared it to other classroom rules that do not have corresponding enforcement mechanisms, but still motivate desired behaviours or actions.

“Are they rules that if broken result in some dire consequence? No. But this motion goes back and speaks to providing a supportive environment,” she said.

On Wednesday, senior administration will contact the Ministry of Education for direction before communicating next steps to parents and employees.

The Winnipeg Police Service has changed a 35-year-old man with first-degree murder in connection with the death of a woman whose remains were found near an apartment building in North Kildonan, and police are investigating the possibility of more victims.

Rosmarie Trapp, whose Austrian family the von Trapps was made famous in the musical and beloved movie 'The Sound of Music,' has died.

Health Canada says there is currently a shortage in this country of infant formula designed for babies with food allergies and certain medical conditions amid a serious shortage in the United States.