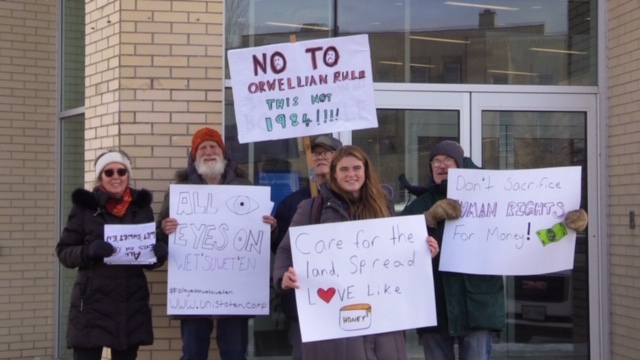 Over 30 people have been arrested by the RCMP in northern B.C., as members of the Wet’suwet’en nation and their supporters attempt to stop construction of a Coastal GasLink pipeline.

Solidarity protests have been happening across the country, since the conflict ramped up last week.

In Goderich, protest organizer Shannon Hugman, says they chose to picket out front of banks in Goderich, because the big banks are financially supporting the Coastal GasLink pipeline.

“I’m not only here to stand in support of indigenous right and human rights, but for climate justice. Because the reason these indigenous people are being arrested and taken from their homes, is to build a pipeline. As a Canadian, as a young person, and someone who plans on being on this planet for many more decades, I cannot stand for that.”

Despite arrests at other solidarity protests around the country, the Goderich protest was entirely peaceful.