Rather than street by street, advance consultation would focus on the entire neighbourhood.

Property owners would collectively discuss where they believe sidewalks should be installed to meet the needs of pedestrians.

“By reviewing neighbourhood connectivity holistically, sidewalk options can be considered where they will provide the greatest benefit without automatically assuming sidewalks on every street,” reads the report.

However, accessibility advocates point to The London Plan’s requirement that sidewalks shall be on at least one side of every street, with very few exceptions.

“The London Plan’s policy is essentially being neutered,” says Jay Menard of the Accessibility Advisory Committee. “If it becomes a choice to do so, we’ve seen what these communities are prioritizing. It’s not accessibility.” 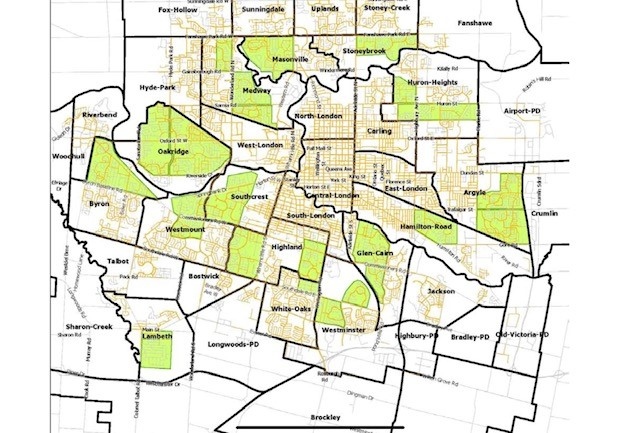 London, Ont. areas that lack sidewalks where the proposed Neighbourhood Sidewalk Connectivity Plans would be developed.

In 2020, city council exempted three streets from the sidewalk requirement based on residents' concerns about shortened driveways and the removal of mature trees.

The decision opened the floodgates in 2021.

Menard believes the proposed neighbourhood consultation approach reeks of ableism, and would further undermine efforts to make streets accessible to all Londoners.

“If we were creating intentional barriers that excluded any other marginalized group from accessing a community -- the city would be up in arms!”

If approved by council next month, development of the Neighbourhood Sidewalk Connectivity Plans would begin in time for the 2023 construction season.