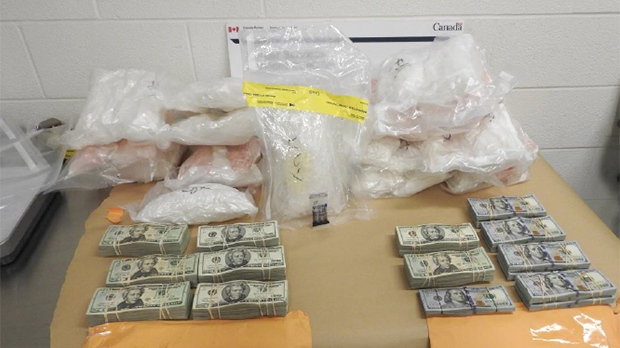 Suspected methamphetamine and U.S. currency seized from a transport truck at the Blue Water Bridge in Point Edward, Ont. on May 2, 2019 is seen in this image provided by the RCMP.

The Canada Border Services Agency and the RCMP say a man is facing several charges after a over 25 kilograms of methamphetamine and $126,000USD cash was found on a transport truck entering the country.

Officials say the truck was taken for secondary examination after it crossed the Blue Water Bridge into Point Edward, Ont. on May 2.

A large scale imaging x-ray was used by border officials which found an anomaly and a drug detecting dog was brought in.

CBSA officers then found 23 clear-wrapped packages that tested positive for methamphetamine and envelopes with the U.S. equivalent of nearly $170,000CAD in cash.

As a result a 42-year-old Mississauga, Ont. man was taken into custody by the RCMP and is facing a number of charges including:

He is scheduled to appear in court on May 21.