OHL history is made as first female takes the ice in Sarnia, Ont.

OHL history is made as first female takes the ice in Sarnia, Ont.

Wearing the Sarnia Sting logo on her chest, Taya Currie made Ontario Hockey League (OHL) history Monday when she stepped on the ice.

The Parkhill, Ont. native was the first female ever drafted into the OHL back in June, and now she's taken the next step by attending orientation camp with the Sting.

"I'm the first one to ever go a camp so that's pretty exciting," says Currie, via Zoom after playing in her first scrimmage.

As the two-day orientation camp got underway at Progressive Auto Sales Arena, her parents Cameron and Michelle, and her sister Tristan, were in the stands cheering her on.

"We've been watching her play for a lot of years and finally she's here and it's history in the making," says Cameron, who admittedly was nervous before the game.

"It's certainly an exciting moment for for female hockey players and athletes in general, and for us as an organization we were we're thrilled to to help put that to the forefront," says Dylan Seca, Sting general manager. 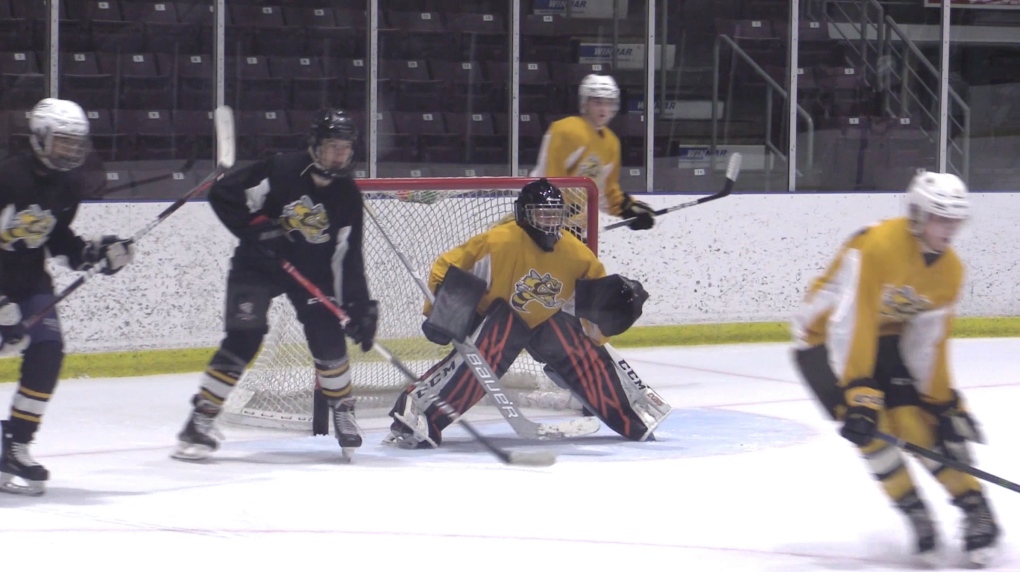 Taya Currie fights through a screen to a see a shot from the point at the Sarnia Sting's OHL orientation camp, August 20, 2021. (Brent Lale / CTV London)

Seca was among the brass in the stands watching her play. He calls her a competitor, with a no-quit attitude.

With two daughters of his own who play hockey, including a goaltender, he's hoping they can one day follow in Currie's footsteps and break down barriers.  One is 13 years old and the other is 11, and he's coached them through their minor careers.

"As you can imagine they had a chance to meet Taya this summer and for them it was like meeting a celebrity," says Seca. "They thought it was great that a girl is going to attend an OHL training camp so they're pretty impressed by her. And then, in Taya's case she's so humble, and quiet and unassuming, which are great qualities".

Currie didn't start the first of two 25-minute periods, but came out to play the second.  The first shot she saw, she stopped and froze the puck to calm the nerves.

"At the beginning, I mean the first game I was a little nervous on my toes, but I've settled into it," says Currie, who has played against boys since she started playing hockey at four years old.

"The game speed and shots, I'm getting used to it. The boys are very nice to me they're great group, so it's been pretty fun.”

Tristan is a AA hockey player with the Bluewater Hawks. She figured her little sister would be a bit nervous to start the game.

"It's really cool to watch her play with these guys," says Tristan.

"She came across the net really well and had good angles. A couple that went by her, but they weren't even all her fault so but she did really well.”

Her team came out on top of a 7-6 win in the first scrimmage, with Currie allowing four goals. She made some quality stops, but had no chance on a couple really nice passing plays.

Currie will have two days of action against first-year playersm at orientation camp. If she plays well enough, she'll get an invite to main camp later in the week.

She's unlikely to get into any exhibition game action, because that would mean losing a big U.S. college scholarship due to eligibility.

She described her expectations for the week.

"Just mostly have fun, enjoy the moment, and take it as a great experience which is once in a lifetime," Currie said.

Ultimately her goal is to one day suit up for Canada's women's national team, but even she understands that right now, she's a trailblazer.

"I want to be a great role model for all young girls," she adds. "I mean they [girls] can do anything they really set their mind to, if you keep working hard, you can achieve that goal.”