A combination of an afternoon rain, and a heavy police presence limited the amount of party-goers at Western University's Homecoming.

"We came here and it's a little bit intimidating they got like four dump trucks here," says Matt Dimanbro, a Western student attending the gathering on Broughdale Ave, just outside the university gates.

"What you have to understand is that we've been locked up for a year we're trying to have some fun. It's one day a year we get to have fun and they have hundreds of cops out here, and they even brought in extra from York and Hamilton."

As partygoers arrived between 11am and 12pm officers walked the street, pushing students to the sidewalks with threats of fines for blocking the roadway. Others were given tickets for open alcohol, as police poured out beers. 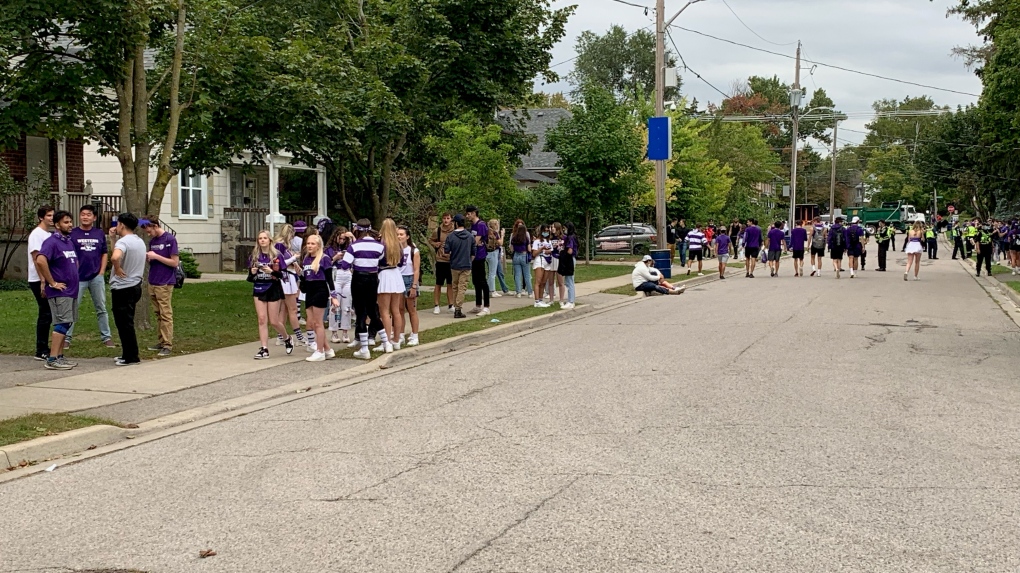 "It's a bit frustrating you're trying to have a good time and you know cops are handing out tickets like crazy," says Nick Jakobiak, who received a fine.

"I decided to walk just across the street to the house my buddies own, and I was handed $125 ticket for having an open can. I get they're just doing their jobs and stuff but like they're doing this to everyone just trying to kind of ruin it for us."

London police, fire and EMS were headquartered on Aubrey St, which runs between Brougdale and Huron St.  They were keeping a close eye on everyone in attendance.

"Enforcement is one of the options. We're trying to work with people to move them along to prevent people from gathering.  It's the safety issue having people blocking the street, so we need to keep it open for emergency vehicles." 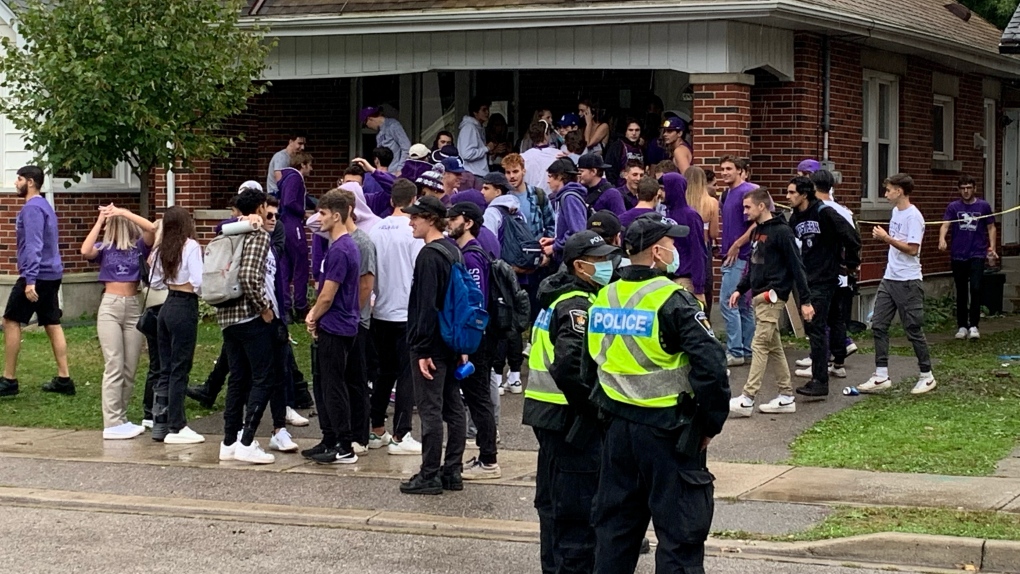 In the past, with up to 20,000 people on Broughdale, properties have been damaged, and people injured. This year, one landlord who owns multiple properties in the area, enlisted the help of friends to stand guard.

"I'm just looking out for the place until this is all over," says Justin Basinger, who was helping his friend protect his properties 138-140 Broughdale Ave.

"Making sure nobody messes it up in any way, because last time his fence got damaged."

Earlier this week, a letter to students at Western University sent on behalf of President and Vice-Chancellor Alan Shepard asked them to avoid unsanctioned parties this homecoming weekend to help improve safety.

The Middlesex-London Health Unit also announced on Wednesday that it was putting into place, two new Section 22 Class Orders.

Citing recent COVID-19 outbreaks related to high-risk gatherings and the ongoing presence of the Delta variant, the health unit says the orders were being put into place to crack down on private gatherings and nightclubs.

When asked earlier in the week if the orders were being put into place because of potential homecoming celebrations in the city, Medical Officer of Health, Dr. Mackie said, "Certainly the gatherings that we've seen at with young people are front of mind and we definitely are concerned about the level of close contact…and of course, with things happening this weekend, we certainly could see more of that and so that is certainly one of the issues."

The order limited indoor gatherings to 25 people, and 100 outdoors. Students who live on Broughdale were well aware of potential fines. 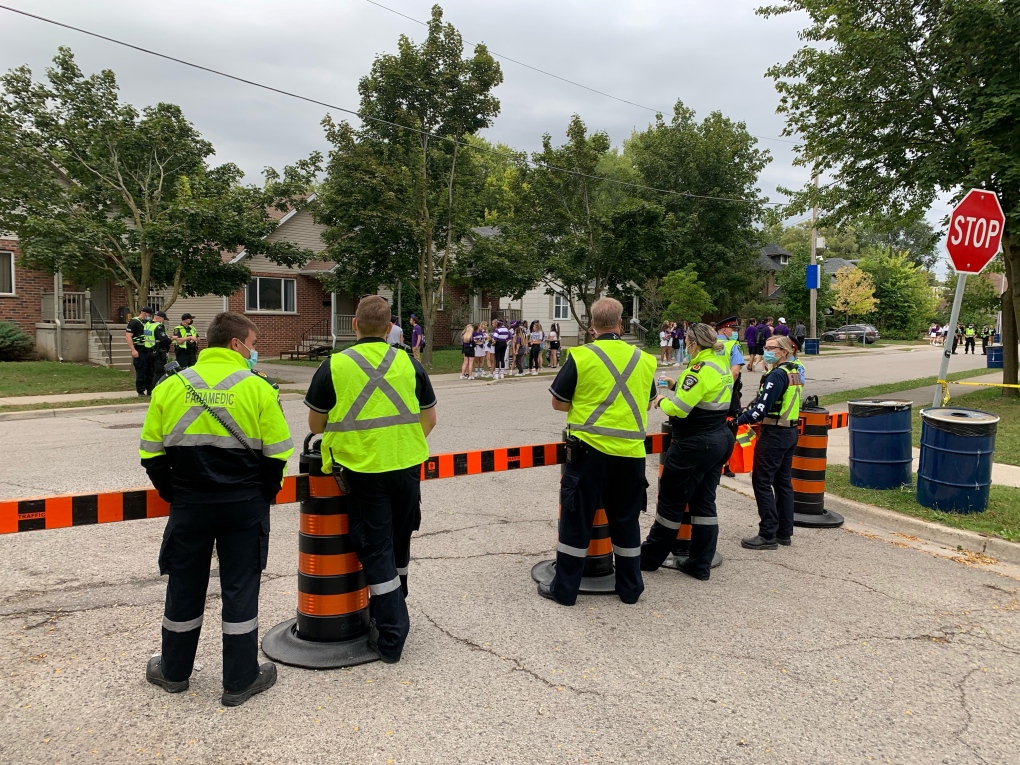 Small gatherings are starting to form on Broughdale Avenue and surrounding area ahead of Western University homecoming celebrations in London, Ont., Sept. 25, 2021. (Brent Lale / CTV News)"We've been keeping it under the limit," says Jaiden Sarai, who has two homes on Broughdale.

"We just had quite a few people in our backyard. The cops actually just walked into our backyard and said they wanted to give us a warning for the amount of people in there. I think it was under 100 but there was an easy warning there were no tickets given out. So, they're just telling us to get some people off our property."

Those who showed up to the annual street party felt they deserved a little fun, and didn't feel anyone would be in danger.

"Most of the students are double vaccinated," says Andreas Mavroudis, a fourth-year student at Western.

"We're here to like interact a little bit.  I think productivity levels at the school have increased, and so long as people keep within reason, I think it's a good thing."

By 2pm, Officers had pushed non-residents off Broughdale Ave, with parties spilling into the adjacent side streets.

"The majority people we dealt with have been very respectful to police and that's what we really appreciate because we're trying to work with everyone here to make it as safe as possible," says Mandich.

Police said they would remain present throughout the evening, and final tallies on tickets and fines would be announced in the coming days.

COVID-19 crashed the party in 2020, but in 2019, London police estimated their response to the unsanctioned event cost taxpayers about $300,000.

With files from CTV's Kristylee Varley.

Having mono in adolescence may increase MS risk later in life: study

Having infectious mononucleosis, also known as mono, during childhood and adolescence may be a risk factor for developing multiple sclerosis later in life, a new study suggests.