Coaches at the London Aquatic Club (LAC) knew that Maggie Mac Neil was special when she first jumped in Thames Pool as an 8-year old.

"The way she looked in the water, her work ethic and her attention to detail we knew we had something pretty special," says Andrew Craven, head coach of the LAC.

Craven was at the London, Ont. pool Sunday morning working with a group of kids.

The Olympic Silver Medallist grew up swimming just like those kids and was a member of LAC until three years ago when she left for the University of Michigan.

"We thought there was a chance for bronze maybe a bronze but we didn't ever think of silver so that was very exciting," says Susan McNair, Mac Neil's mother.

McNair, along with Maggie's dad (Edward) and sister (Clara) watched the historic race from a cottage in Kincardine. They had a cottage next to McNair's brother so the entire family were cheering on Team Canada.

"There was a lot of noise on the beach, that's for sure," says McNair.

Edward said it was so exciting to see his daughter win a medal, but it was bittersweet.

"Not being there is also a difficult thing to because usually they're sitting in the stands," says Edward Mac Neil.

"We always are there with other parents but I think this silver medal will really give her some, some motivation".

That motivation is needed for Sunday night's 100M Butterfly final. Maggie is the 2019 World Champion, and even though she didn't run her best in the semi-final, she is still a medal favourite.

"I just talked to her at the end of the day there (Japan), and she looked very, very tired," says McNair.

"I thought your eyes look tired, I think you need to go to bed so I think they've been riding high all day". 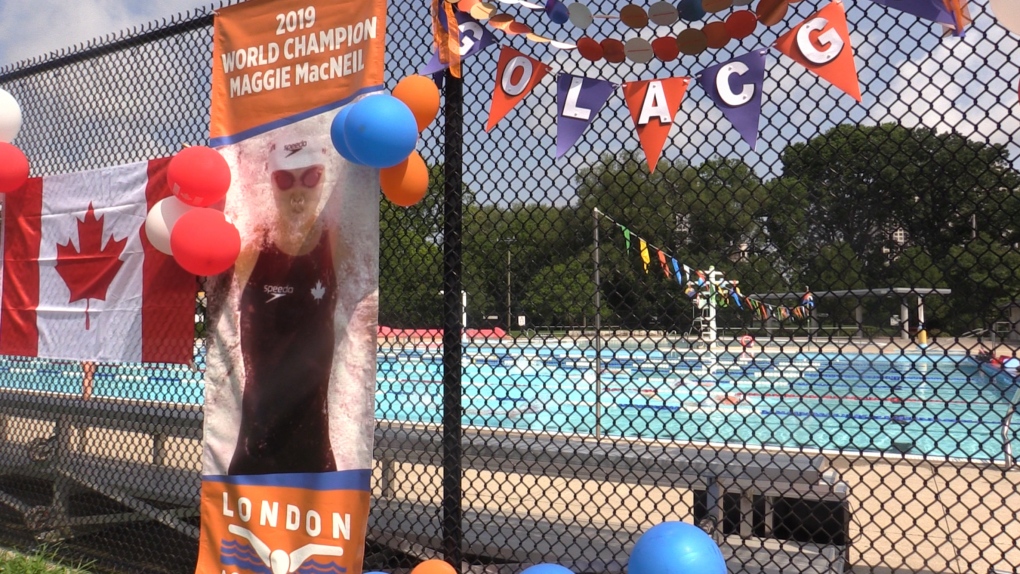 "We swim the exact same event 100 Fly, and I watched her race to see how I can improve," says Vladislav Zagidulin, 17, who hopes to reach the Canadian Trials.

"I especially like that second wall, how she like bounces off of it, I want to go exactly with that".

Amaris Peng, 16, is a breaststroker who wants eventually wants to reach the pinnacle like Maggie

"I just how hard working she is," says Peng.

''I also like her work ethic as she came from like the bottom all the way up to the top".

LAC will be cheering on Maggie as she goes for gold in the 100M Butterfly final Sunday night. They have over 100 cars attending the Oxford Drive-In near Woodstock, Ont. and will watch the big race on the big screen.

Craven says despite not having a great semifinals, she 'has a lane' which means she is in the final and anything can happen.

"She has that awesome underwater kick and she's always had that even from the age of eight," says Craven.

"She wants to be close on that first leg tonight and then come off that turn, start with that great underwater kick and then just start trying to run people down stroke by stroke".

U.S. Justice Department Officials are indicating that they are ready to resolve the criminal charges against Huawei executive Meng Wanzhou, and representatives from both sides will be appearing in a New York court shortly to address the matter. According to a letter docketed on Friday, 'a resolution of the charges against the defendant in this matter,' will be discussed, potentially bringing an end to a nearly three-year legal and diplomatic saga.

Indigenous Services Canada (ISC) is reporting that residents of the Saugeen First Nation in Ontario were given expired doses of the Pfizer COVID-19 vaccine for nearly a month before the error was caught.

A draft report of the election review in Arizona's largest county by supporters of former U.S. president Donald Trump found that current U.S. President Joe Biden did indeed win the 2020 presidential contest there, an embarrassing end to a bizarre quest to find evidence supporting Trump's false claim that he lost because of fraud.

U.S. Vice President Kamala Harris' live interview on 'The View' was abruptly delayed Friday after two hosts of the talk show learned they had tested positive for COVID-19 moments before Harris was to join them on the set.

Alberta Premier Jason Kenney is confronting a full-throated justification for a pink slip thanks to his chronic tone-deafness during the pandemic, incredulously topped off by taking a two-week vacation in Europe this month as Albertans were dying from the consequences of his policies, writes Don Martin in his exclusive column for CTVNews.ca.

A Saskatoon judge has ruled in favor allowing a father to have his child vaccinated despite the mother being opposed to her child getting the shot.