Soon-to-be 99-year-old George Beardshaw got the surprise of a lifetime Sunday afternoon.

Believing he was headed to the Canadian Corps Bar on Dundas Street for a small get together, he arrived to see a hall full of family, friends and Legion members cheering for his arrival.

“I never knew this was going to happen, I’m spoiled,” an overwhelmed Beardshaw told CTV News London. “I just thought it was I just thought it'd be a few people, but there is tons of people here.”

But the former prisoner of war and oldest surviving member of the British Home Children still had another major surprise to come after speeches and well wishes.

The deputy defence attaché for the French Embassy was on hand to present Beardshaw with the Legion of Honour Medal. 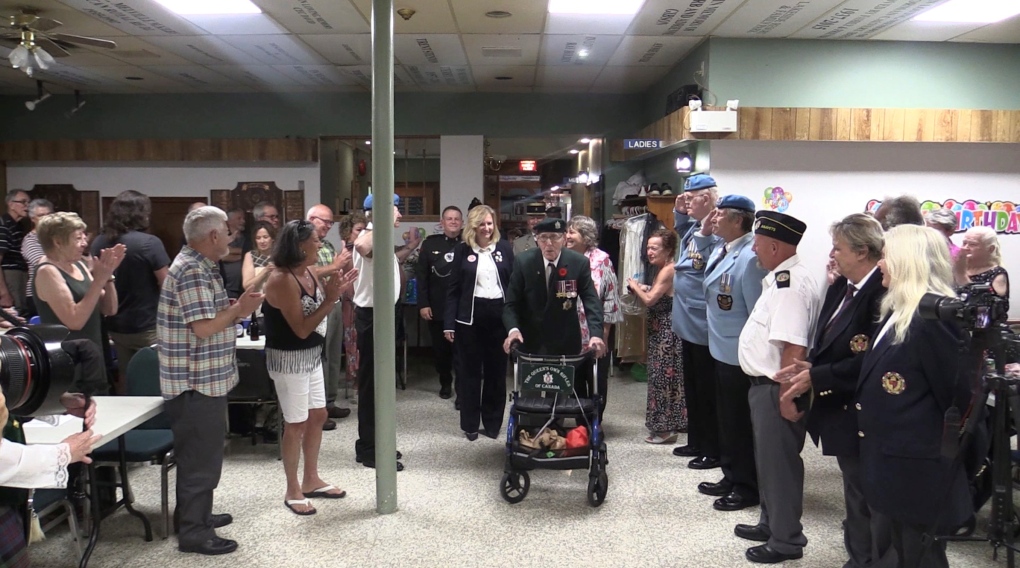 A surprised George Beardshaw, 98, arrives at the Canadian Corps Bar on Dundas Street in London, Ont. The WWII vet had no idea he was being recognized with the French Legion of Honour Medal on August 28, 2022. (Brent Lale/CTV News London)“France is going to recognize George as a fighter in France,” says Col. Roger Vandomme. “He came to France at the end of the war, to participate with the defense of our common values and liberate my country.”

This is the third wave of medal presentations for Vandomme. The first came in 2006 recognizing the participants of D-Day. Another round came in 2014, and now this is likely the last wave for the aging World War II veterans like Beardshaw.

“Very often they are very humble people and they don't want to talk about themselves and what they did,” says Vandomme. “We asked plenty of people and the families we advertised it in order to identify them.”

Vandomme says the honour is equivalent to the Order of Canada.

“The embassy is going to present it to the Government of France, because it's the highest order of France it has to be signed by the president of the republic. It’s very high in order to go down until today when we present it,” he says.

Beardshaw is a resident of Parkwood Hospital, and will have a great story to tell when he returns home.

“They’ll be surprised when they hear what happened to George,” says Beardshaw.

Alcohol and speed were factors in a tragic collision that killed three junior hockey players in B.C.'s Lower Mainland last year, according to a coroner's report.

The Canadian men’s national team returns to the FIFA World Cup pitch on Sunday to face Croatia, where they must pick up at least one point or risk elimination. CTVNews.ca will follow the match live.

Canada must secure at least one point against Croatia to stay alive in the tournament and four-time champion Germany looks to rebound against Spain. Belgium is playing Morocco after Costa Rica defeated Japan.

A 12-year-old boy is dead after playing Russian Roulette with peers in Jackson, Miss., police say.

Protests against China's strict 'zero-COVID' policies resurfaced in Shanghai and Beijing on Sunday afternoon, continuing a round of demonstrations that have spread across the country since a deadly apartment fire in the northwestern city of Urumqi led to questions over such rigid anti-virus measures.

Airbnb has a plan to fix cleaning fees

Pretty much everyone hates Airbnb cleaning fees -- those pesky charges tacked on to your vacation rental bill that supposedly cover the costs to get the place ready for the next visitors. Travelers don't like the expense, and hosts don't like charging them, either.