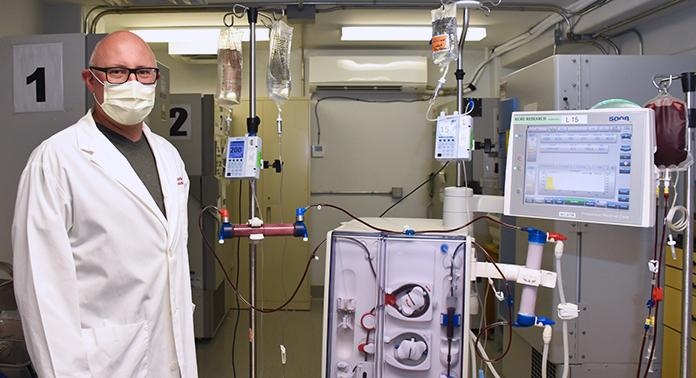 A new form of expanded dialysis tested by researchers in London, Ont. is improving the quality of life for patients with chronic kidney disease, according to a newly published study.

Robert Wahby was a participant in a clinical trial that used this new form of expanded dialysis.

“I was hoping that trying this new dialyzer would help get rid of some of my symptoms. My appetite was down, I was a little weak and I was hoping I would sleep better.”

For Wahby the effect was definitely noticeable, “I felt better, I was eating more and I had a better night’s sleep,” he said.

Expanded dialysis works to remove a broader range of toxins from the body as compared with traditional dialysis.

The method was tested by a team of researchers out of Lawson Health Research Institute (Lawson) in London, Ont. led by Dr. Chris McIntyre with Lawson and London Health Sciences Centre (LHSC).

Patients in a clinical trial at LHSC were given expanded dialysis through a new machine made by Baxter International Inc.

The dialyzer developed by Baxter is called THERANOVA allows larger sized toxic chemicals to be filtered from the blood while allowing essential molecules to remain.

“The chemicals that can now be filtered out can cause inflammation, malnutrition and the buildup of waste,” explains Dr. McIntyre in a release.

“With traditional dialysis treatments, we haven’t been as successful at removing those chemicals and some patients experienced significant side effects.”

The study took three months and involved 28 patients. While taking part in the study participants were monitored through the London Evaluation of Illness (LEVIL) app, developed by Dr. McIntyre with the help of patient input.

With the first phase of the trial being successful, the team will now expand to included 60 dialysis patients.

The next step would be to expand to a multicenter clinical trial led by Lawson with the University of Toronto and Humber River Hospital.

You can find the published study here.