Employees at General Coach in Hensall, Ont. are feverishly putting the final touches on four movie trailers that are destined for a Hollywood production in Australia’s outback.

“Mad Max. I don’t know what Mad Max is, really, but it’s being shot in Australia, and I guess it’s a big deal. That’s where these units are on their way to, to be on that set,” says long-time General Coach President Roger Faulkner.

After a decade of sending their theatrical trailers to movie sets across Europe, General Coach has just broken into Australia, the second-largest movie market outside of Hollywood, Roger adds.

“Australia will be new for us, but we’ve got units in England that have been on the sets of Peaky Blinders, Mission Impossible, The Crown. We’ve been on some big productions, for sure,” says General Coach Vice President Chris Faulkner. 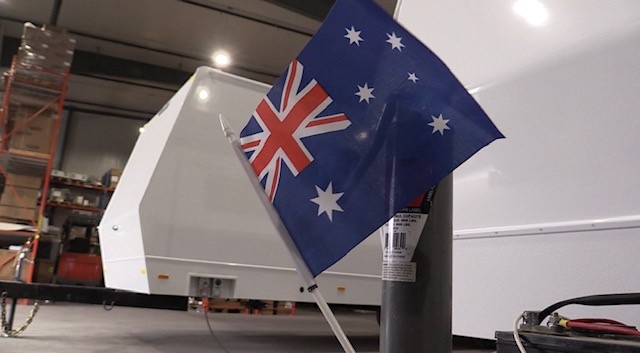 An Australian flag on a movie trailer destined for that county is seen at General Coach in Hensall, Ont. on Thursday, Jan. 27, 2022. (Scott Miller / CTV News)

Since they started building customized theatrical trailers for movie sets about 10 years ago, General Coach has shipped at least 1,000 units overseas to sets like Jurassic Park and Bohemian Rhapsody.

“Everybody knows what’s happened during COVID. Everybody has watched every movie ever made. So they can’t make them fast enough, so it’s growing exponentially. It’s far surpassed what I expected to produce out of this building,” says Roger.

Business is so good, General Coach is already talking about another expansion, after opening their new theatrical trailer production facility in 2019.

“We were just talking, if this place isn’t big enough, I guess we’ll build another building,” says Roger.

The company’s first shipment of movie trailers to Australia hits the road on Monday. Roger says it takes 40 days to ship the units “down under.”

Hybrid Parliament should be here to stay, say MPs in new report

The hybrid sitting structure and electronic voting system should become permanent features of the House of Commons, according to a new report from MPs on the Procedure and House Affairs Committee.

WHO declares COVID-19 global emergency isn't over. What happens next?

The World Health Organization decided Monday not to end to the COVID-19 global public health emergency it declared three years ago, even though the pandemic has reached what the international body calls an 'inflection point.'

The rebuild of the Vancouver Canucks has begun, with centre Bo Horvat heading to the New York Islanders.