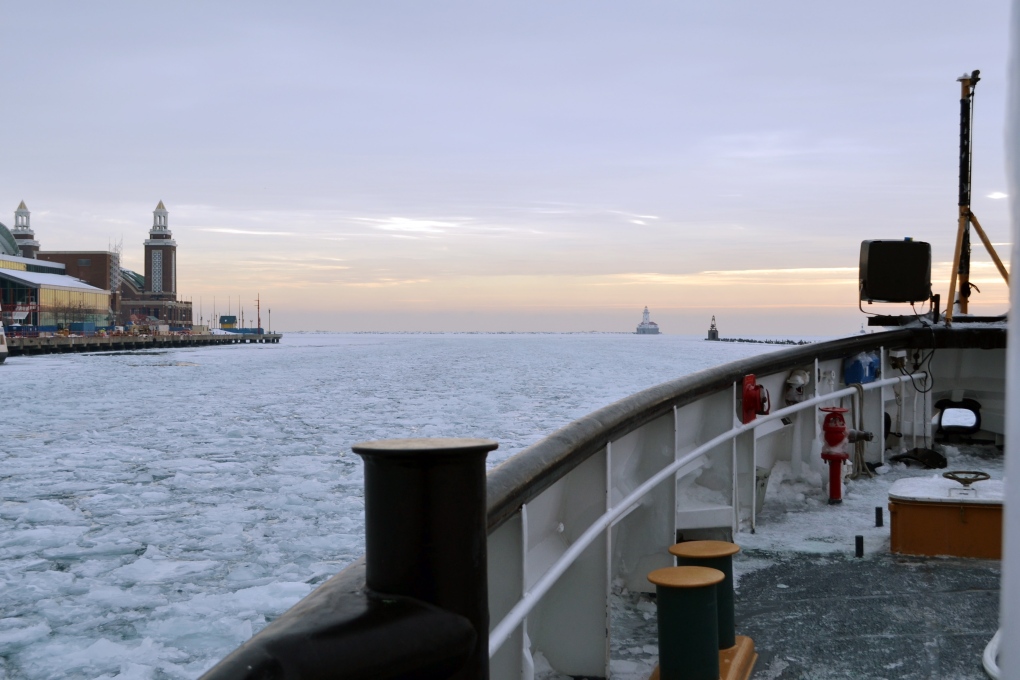 CHEBOYGAN, Mich. -- From the bridge of the Coast Guard cutter Mackinaw, northern Lake Huron looks like a vast, snow-covered field dotted with ice slabs as big as boulders -- a battleground for the icebreaker's 58-member crew during one of the roughest winters in memory.

It's been so bitterly cold for so long in the Upper Midwest that the Great Lakes are almost completely covered with ice. The last time they came this close was in 1994, when 94 per cent of the lakes' surface was frozen.

As of Thursday, ice cover extended across 88 per cent, according to the federal government's Great Lakes Environmental Research Laboratory in Ann Arbor.

Sections of the lakes, which hold nearly one-fifth of the freshwater on the world's surface, harden almost every winter. That freezing keeps the Coast Guard's fleet of nine icebreakers busy clearing paths for vessels hauling essential cargo such as heating oil, salt and coal. But over the past four decades, the average ice cover has receded 70 per cent, scientists say, probably in part because of climate change.

Still, as this season shows, short-term weather patterns can trump multi-year trends. Winter arrived early and with a vengeance and refuses to loosen its grip.

"That arctic vortex came down, and the ice just kept going," said George Leshkevich, a physical scientist with the federal lab.

The deep freeze is more than a novelty. By limiting evaporation, it may help replenish lake water levels -- a process that began last year after a record-breaking slump dating to the late 1990s. Also getting relief are cities along the lakes that have been pummeled with lake-effect snow, which happens when cold air masses suck up moisture from open waters and dump it over land.

Buffalo, N.Y, got nearly 43 inches of snow in January, but this month just 13 inches have fallen, a decline resulting largely from the freeze-over of Lake Erie even though Lake Ontario has remained largely open, said forecaster Jon Hitchcock of the National Weather Service.

Heavy ice can also protect fish eggs from predators, and it has delighted photographers, ice anglers and daredevil snowmobilers.

At Apostle Islands National Lakeshore in Wisconsin, the rock-solid cover has allowed around 35,000 visitors to trudge miles over Lake Superior to explore caves featuring dazzling ice formations. It's the first time in five years the lake surface has been firm enough to allow passage.

With no letup in the cold, the ice hasn't experienced the usual thaw-and-freeze cycle, so nature's artistry is even more delicate and beautiful, with needle-like hoarfrost crystals sprinkled across sheets that dangle from cave ceilings like giant chandeliers.

"Seeing them like this is almost a once-in-a-lifetime experience," Superintendent Bob Krumenaker said.

There's even an (apparently) tongue-in-cheek Facebook page inviting people to join a convoy of snowmobiles, cars and other vehicles on a nearly 80-mile trek across Lake Michigan. Never mind that its waters remain partly open and experts warn the ice can be dangerously unstable.

"If it freezes, and you miss this chance, when will it happen again?" the page says. "Feel free to invite more folks!"

For Coast Guard icebreaker teams, it's all business. They've logged four times more hours this season than the average for the same period in recent years, said Kyle Niemi, spokesman for the agency's Cleveland district headquarters.

The 240-foot-long Mackinaw began its duties Dec. 16 -- several weeks earlier than usual -- and worked nonstop until Feb. 8, when traffic slowed enough to allow a break.

"As you can imagine, the crew's tired," Cmdr. Michael Davanzo said this week during a tour of the ship in its home port of Cheboygan.

A 35-year Coast Guard veteran who has spent 12 years on the lakes, Davanzo said this winter is the toughest he's experienced because the ice came so soon and is so thick and widespread, and the weather has been constantly bitter.

The Mackinaw, commissioned in 2006 to replace an older vessel with the same name, is designed specifically for duty on the Great Lakes. It's propelled by two "Azipod" thrusters that can spin 360 degrees and fire jets of water at adjacent ice, weakening it. Sometimes the crew will drive the ship's bow onto an ice sheet to crack it with sheer weight. Or they'll go backward, chopping up ice with the propeller blades.

When the going gets tough, there's the battering-ram option -- hurling the reinforced hull directly against walls of ice that can be several feet thick.

The workload typically drops sharply after navigational locks on the St. Marys River, the link between Lakes Superior and Huron, close in mid-January and most large cargo haulers dock for winter. But the ice was so thick this year that a number of freighters were still struggling to complete final deliveries days later. Even now, demand for road salt and heating oil in the Midwest is keeping some icebreakers busy.

One day last month, the Mackinaw spent 16 grueling hours helping a freighter squeeze through a narrow 3.5-mile section of the St. Marys. As the Mackinaw attacks the ice, the engines roar and the ship vibrates. The noise and motion are "like living in an earthquake 16 hours a day," Petty Officer 3rd Class Ryan Alderman said.

Davanzo hopes for rain and warmer temperatures that would melt some ice before the locks reopen in late March, when the Mackinaw will venture onto Lake Superior and clear paths for iron ore and coal haulers.

"But if the weather stays like this," he said, "we could be breaking ice all the way to the middle of May."

Despite the inconvenience, there's a silver lining for shippers. Since the low-water period began in late 1990s, they've been forced to carry lighter loads to avoid scraping bottom in shallow channels and harbours. Heavy snow and rain in 2013 finally raised water levels.

Ice cover blocks evaporation, the leading cause of low water. It also will keep the lakes cooler for a longer time this year, delaying the onset of heavy evaporation season, scientist John Lenters reported in a paper last month, although the benefit is partially offset by stepped-up evaporation shortly before the ice forms.

In Lake Superior, snowbound Isle Royale National Park is home to a dwindling and inbred wolf population that is usually trapped on the island. Biologists hope a newcomer or two will venture to the park now that the lake is almost entirely frozen over. The park's first wolves are believed to have crossed an ice bridge from Canada, 15 miles away, in the late 1940s.

There's also a chance that one or more of the island's wolves could grab the rare opportunity to escape.

"They are inveterate travellers," veteran wolf expert Rolf Peterson said. "And they don't need a reason that would make sense to us."