Getting their feet wet: Youth learn to build boat in five days

Could you build a boat in five days?

That’s a mission being taking on by youth groups across London -- and they’re planning to take the boat out for a test drive this weekend.

"It’s like having fun and you like…learn new stuff and it's really fun to do it,’ says 14-year-old Amin Smoqi, a boat-camp team member.

On Tuesday morning, youths in grades 8-10 in south London were building a boat in the parking lot outside the South London Neighbourhood Resource Centre (SLNRC).

The centre teamed up with Stem2Stern, a local boat building program that helps get youth engaged.

“We try to get the kids out of their bedrooms, off their devices, get outdoors and get them creative with their hands,’ says Stem2Stern Founder David Vine.

The workshop focuses on building a boat from scratch in a time period of five days.

The youth participating in the camp are Yazidi refugees from Iraq, many coming to Canada three or four years ago.

Justine Miles, SLNRC manager, says the camp is the best thing they have experienced so far, according to them.

“This is something they will never forget, they’re so excited. They’re all ages 14-17 years old. And we chose some of our more isolated youth, so they are not engaging in some of our other traditional programs, so we decided to bring the boat building program to them.”

Vine says Monday started out quite slow, but by Tuesday the youth were ready to put their hands to work.

“On day one they all kind of shy away from the tools and they all stand at the back, and now they’re all fighting over the tools to be the first ones at it." 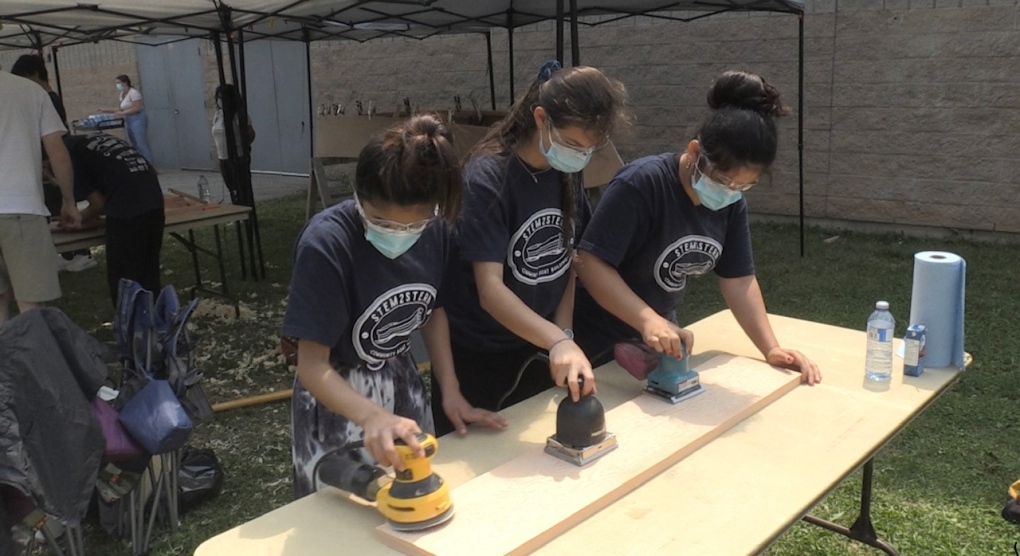 It may only be a five-day workshop, but the skills taught at the camp can last a lifetime.

“We are learning so many things, new, and its so exciting,” says 15-year-old Sana Azandaan.

It takes about 30 hours to build the 12-foot-long and four-foot-wide boat called Bevin’s Skiff.

"This Saturday morning, the youth will be taking the boats out for a test drive on the water at the Fanshawe Lake Conservation Area.

"I am looking forward to ride it the boat we made all of us,” says Azandaan.

It’s just one of many adventures to come for these new builders.

“One of the kids said, OK that’s great, now we have done the boat and next week we want to build a house. So you can see that they are already forward thinking. Now I think they figure they can tackle anything,’ says Vine.

The boat building camp run by Stem2Stern is in partnership with Newcomer Settlement Services of SLNRC and is supported with funding from Immigration Refugees and Citizenship Canada (IRCC).

Stem2Stern is expecting to do eight back-to-back builds in pockets across the city.

Three boats have either been built or are in progress.

One boat was built at North London Resource Centre last week, and another at the Neighbourhood Resource Association of Westminster Park the week before.