London police say an elderly woman has died after being pulled unconscious from a blaze at a two-storey home at 80 Sterling Street.

Police, fire crews and EMS were called to the residence south of Oxford Street and east of Adelaide Street by neighbours just before 12:30 p.m.

Officials say the 85-year-old woman was found unconscious and transported to the London Health Sciences Centre, but did not survive.

The cause of death has not yet been confirmed.

Officials say there were no working smoke alarms in the home.

It is also unclear how the fire started, but smoke was billowing from the home as firefighters arrived.

The windows were also apparently broken before fire crews arrived, possibly due to an explosion inside the home.

The fire is not believed to be suspicious, but the London Police Service Major Crime Section, West Region Coroner and Ontario Fire Marshal are all investigating. 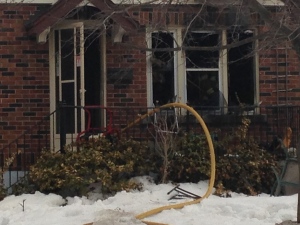