A popular Walkerton-area restaurant has been demolished after it suffered significant damage in a weekend fire.

South Bruce OPP were called for an alarm at the Dunkeld Tavern on Bruce County Road 3 shortly before 2 a.m. on Sunday. Officers arrived to find the building fully engulfed in flames.

Crews with the Walkerton, Teeswater, Mildmay, Hanover and Elmwood fire departments and Bruce Power were all called in to deal with the blaze.

County Road 3 was temporarily closed Sunday morning from Concession 2 to Concession 6 for the safety of the fire crews and motorists.

Neighbour Wes Abell says “Actually they had it pretty well out at one point we thought, and it flared up again and it got down in the basement or somewhere, I don’t know for sure what but they weren’t able to get it out…you see what it looks like.”

On Monday, crews demolished what was left of the building. Damage is estimated at around $500,000. There were no injuries.

The owners are currently out of the country on vacation, but are heading back to see what’s left of their business.

An investigator with the Office of the Ontario Fire Marshall was called in to assist the South Bruce OPP with this case.

The fire completely knocked down the heavy stone structure so the exact cause may never be known, but foul play has been ruled out.

Outside the restaurant, area residents have been gathering to take photos and share their memories

Peter Schmalz calls the situation really sad and says “This used to me my watering hole for almost half-a-century and it’s come to an end. They’ll never rebuild there again.”

Adam Scammel adds “They knew us by name, they were always friendly and greeted you as soon as you walked in the door.”

The historic hotel turned restaurant dates back to 1868, and locals say the loss of Dunkeld’s history and hometown hospitality will be impossible to replace 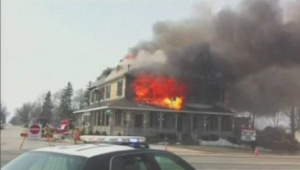